Toys “R” Us announces bankruptcy proceedings – the end of an era?

I was eleven years old when I first set foot in Toys “R” Us.  Back then, in the 80’s going to Toys “R” Us wasn’t a shopping trip, it was a pilgrimage.  These days, with millions of toys at your fingertips it’s easy to forget the feeling of walking into that mammoth store, stacked floor to ceiling with nothing but toys.

Imagine being an eleven year old kid, an absolute action figure and toy freak, and going to your first Toys “R” Us.  Action figures were in aisle 7c back then, somehow I knew that, I have no idea how, and I swiftly navigated my way through stacks of diagonal bicycles, frantically looking at the aisle signs, looking for those two precious characters.

It was a life changing moment for young me.

For the whole trip down to the store, I had dreamed of what I would find, and recently becoming enamored with the Silverhawks animated series, I desperately hoped beyond hope that this mythical toy mecca would have them.

I walked out with a handful of chrome, plasticy goodness (long since sold, I’m afraid to say) and my post-Toys “R” Us life would never be the same.

The retail toy giant announced that they officially filed Chapter 11 yesterday, in hopes for another restructuring and delaying of debts so that they might find a way to continue to survive.  But with this being their second attempt at restructuring in the face of retail giants like Wal-Mart, Target, and Amazon, one must wonder just how much longer they have left, and then the kid in me dies just a little bit inside.

I can, more or less, go to Toys “R” Us any time I want to now.  It’s an hour drive, but I’m an adult with a car.  It doesn’t quite mean the same thing to me now as it did back then, but I still remember the look on each of my daughters’ faces the first time they set foot in those hallowed halls.  The feeling that generations of children might never experience that same feeling makes me sad.

Let’s all hope that this announcement prolongs the toy giant’s life and doesn’t lead to yet another downturn in the recently failing brick and mortar retail market.

This seems to be a regular occurrence!  Both at ToysRUs.com and at the brick and mortar locations, all Kre-O sets are once again Buy 1 Get 1 50% Off!  Use this chance to get the addiction started, or just continue feeding that addiction by buying more sets!

Check out the Kre-O section at ToysRUs.com, or hit your local store and support this great new iteration of G.I. Joe.  To see my thoughts on the G.I. Joe Kre-O sets, hit up my G.I. Joe Kre-O Review Page.  Also, you’ll want to review the G.I. Joe Kre-O SuperPage to refresh your memory on the blind bag codes and make sure you know exactly what to shop for. 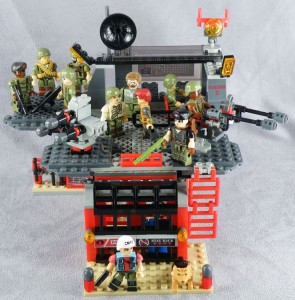 “JOE”rassic Park… ya like that?  Yeah, I gotta give Chuck from What’s on Joe Mind credit for that one.  He claims that was his invention.  If someone saw it somewhere else, it’s not my fault!

According to gijoefrank from the Terror Drome forums, he found these at retail in a Southern California Toys “R” Us and supplied a nice assortment of images as proof as well.  It’s amazing to me that we just heard confirmation of these two days ago and already retail sightings have begun.  Pretty cool.

New role play item at Toys R Us trains you in the ways of Battle Kata!

Someone correct us if we’re wrong, but Twitziller pointed out this role play item at ToysRUs.com and I think it’s totally new.  At least I don’t remember seeing it before.  It looks like a kids’ version of Roadblock’s now infamous Battle Kata weapons vest.  Allowing the wearer to store their role play weapons in the various pouches and be ready to kick some Cobra ass!

So Toys “R” Us has this computer listing for a Spec Ops Tomahawk and…wait…WHAT?

That was kind of my reaction when this news floated across the Internet this morning, courtesy of HissTank member Master Chief.  His eagle eyes dug into some SKU listings of G.I. Joe product, which I am mirroring below:

As Master Chief says, a lot of this is stuff that we already know, but what is this “Special Ops” stuff?  Sure, it’s the name of the online Facebook game, but I’m not sure that particular corner of the G.I. Joe marketing bracket has really been lucrative enough to garner it’s own branch of toys.

Of course what’s drawing the most attention (as it should) is that listing for a Special Ops Tomahawk.  That certainly sent the G.I. Joe world on its ear today, understandably so.  The Joe design team has mentioned a few times that another classic vehicle was being planned for this year, similarly to the Skystriker, but I’m not sure anyone would have guessed the Tomahawk was a possible subject.  I know I wouldn’t have.  The tooling and expense required for a vehicle like that doesn’t seem feasible under a reasonable MSRP.  But, really, we’ve seen G.I. Joe reuse names a ton over the years…this could be something entirely unrelated.

Regardless of what it is, things are certainly looking a little more exciting for Toy Fair next week.  You can bet I’ll be in attendance to get all of the pics and information that I can!

Thanks again to Master Chief on HissTank for sparking this interesting speculation!