Somewhat surprising to us, many folks have been asking if we could do a screening of the G.I. Joe: Retaliation film with our own commentary…well, since G.I. Joe news is so slow, we figured what better time than now! Join Gary, Justin, and Mike as they watch the entire G.I. Joe: Retaliation Extended Action Cut on Blu-Ray and give their thoughts and opinions throughout the entire film.

We tried to keep sports metaphors to a minimum, but no promises about childish humor.

Check out the embedded player below or our Podbean page for the latest special edition, and enjoy!

This massive compilation is being hosted on GeneralsJoes for free download.  You can “right-click” and “save as” right here, or the smaller image below.  It’s an awesome image to see all collected together.

END_OF_DOCUMENT_TOKEN_TO_BE_REPLACED

A short while ago, a few of us on the What’s on Joe Mind podcast were fortunate enough to get Dave Tree on our show.  Dave had the distinction of being able to get to a screening of G.I. Joe: Retaliation nearly two weeks before official release, and was right on the show with a terrific report about the film.

Unfortunately, the information was embargoed, so the Podcast couldn’t launch until March 27th.  The special edition went live on that day thanks to the heroic efforts of Gary, but with my work and web schedule I hadn’t had a chance to post an update about it until now.  This was a fantastic special edition with Dave breaking down the film piece-by-piece.

BEWARE – HEAVY SPOILERS ARE IN THIS PODCAST

Dave literally goes through the entire film and talks about events in the movie.  So for folks who don’t want spoilers, you’re gonna want to avoid this one.  Still some terrific insight.  Check it out on Podbean, or the embedded players below.

We’re not kidding.  If you listen to this and you don’t like spoilers BEFORE you see the movie, then its YOUR fault.  We recorded this a few weeks ago just hours after our man in the UK, Dave Tree, got to see an advance preview of GI Joe Retaliation.  While the details were fresh in his mind, he joined Justin and Gary to give his full, no holds barred report of the film.  You patiently waited THREE years since Rise of Cobra AND on top of that, ANOTHER NINE MONTH delay so they can convert it to 3D.  Now it is OUR time and OUR turn.  Is everything better in 3D?  Find out next, in this monumental and landmark special edition of WOJM!  Oh, and thanks to Jon Chu for the intro!

HUGE thanks as always to Dave and Russ for their tireless work in covering these events for us!!

The fine folks from Imax have dropped me a line to let me know that they are running a very cool contest, with an even cooler prize!

Here are the details:

“We’re inviting people to use Vine (https://vine.co/), the 6-second video app, to create their own PSA video for a chance to win a G.I. Joe: Retaliation poster signed by the cast. The winner will be chosen by IMAX, and the contest ends this Sunday at midnight EDT. For inspiration, check out some of the submissions in our Gallery!

The attached image below also outlines the requirements and the prize.  Pretty awesome! 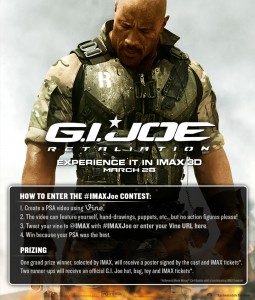 I know a lot of folks were wondering what was up with the shifting release dates, sneak previews, and other jumping around with G.I. Joe: Retaliation as we neared the Easter weekend.  As for myself, I wasn’t complaining at all, as it gave me the chance to see the film a few days early!

Turns out the move might have benefited the film.  Several early box office reports have started coming in, and signs are looking good for a strong opening for G.I. Joe: Retaliation.  Various articles below talk about it:

Deadline reports that chances of the film hitting a $50M+ opening weekend are good while the Hollywood Reporter says that International markets should top $100M for the opening weekend.  That would put G.I. Joe: Retaliation at around $150M for opening weekend numbers, which is half of what Rise of Cobra did for its entire theatrical run (both domestic and international).

Interesting information to be sure, and numbers to keep an eye on.  Thanks to Twitziller and ComicBookMovie for the info.