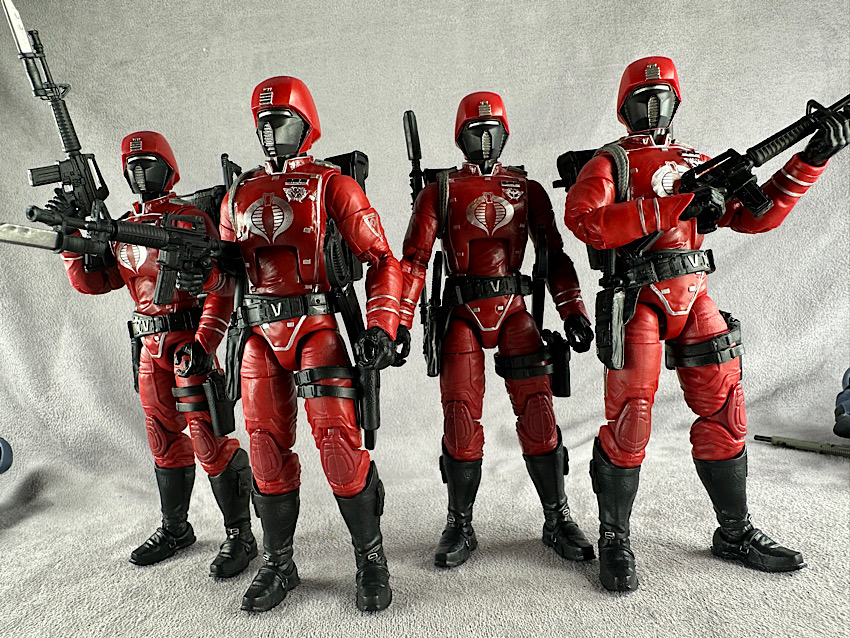 I must say when I received this shipping notice last week it was the most pleasant of surprises! Seems like more often than not, the one place I pre-order from is typically the last place that actually sees stock arrive, but in this case, I guess I chose right!

Big Bad Toy Store came through with the early drop and I couldn’t be happier. Seems only appropriate I received them just as I was getting ready to write a review of Tomax and Xamot.

As always, check the G.I. Joe: Classified Review Page or click the link below — this has gotta be one of the best figures I’ve reviewed yet!

I will admit, I wasn’t quite sure how to handle this review at first, not wanting to be too repetitive as I ran down the pluses and minuses of each figure. So instead, I combined them into a single review, trying to showcase the various similarities, differences and the value of buying the twins in two separate packages versus a single two-pack.

Now, for as much as I generally push back against the strict adherence to vintage look and feel, I will admit — I got a little giddy having these figures in hand, what with the twins being some of my favorite characters and figures within the Real American Hero mythology.

To see my full thoughts, check out the G.I. Joe: Classified Review Page or the link below.

So, here it is — this is the figure you have to blame for suffering through a week of new GeneralsJoes reviews. While I’d been stacking up my new Classified figures over the period of a few weeks, I hadn’t buckled down and actually done any reviews yet– then I got the shipping notice from BBTS for my four Crimson Guards and knew it was time to get off the pot. After all, the “Siegies” are one of my all time favorite elements of the Real American Hero mythology and by all accounts, Hasbro did a spectacular job updating them for the G.I. Joe: Classified line.

The Crimson Guard are one of those characters who really came to life throughout Larry Hama’s original run of the Marvel Comics, evolving far beyond the “COBRA troopers, but in red” sense that you sometimes got in the Sunbow series. I think as time went on, the animated continuity did make some efforts to differentiate them (ironically, it seemed to be the DIC series that really went the next step in their separation, with Scoop’s role as a Crimson Guard). Throughout Marvel, you had the Fred’s making frequent appearances, with one of Snake Eyes and Stalker’s Vietnam buddies Wade Collins even falling into their ranks. Looking back at some of those runs, it’s pretty amazing how they shaped the G.I. Joe universe as we know it. Hell, one of them even donned COBRA Commander’s battle armor and took over for a time.

Though it’s interesting — while folks will immediately see the vintage inspiration in these figures, I find it necessary to point out that these Crimson Guards are not in fact quite as strictly based on the 1985 original. Instead, they seem to pull from a few different more modern iterations of the Crimson Guard. And yes, while the 25th Anniversary and more modern versions are, in their own way, faithful to the ’85 originals, there are some key differences and the Classified version seems to prefer the 25th Anniversary look and feel over the ’85 one, mostly in their choice of color scheme.

Upon first glance, it would be easy to simply say Hasbro copied the original Crimson Guard’s aesthetic for their six inch update, but in fact, that’s not entirely true. While the overall look is remarkably similar there the paint deco is much more evocative of the 25th Anniversary version of the character than the ’85 vintage.

Where the original 1985 Crimson Guard was a vibrant shade of red, most future iterations leaned more darker and matte versions of the color. I understand why, but part of me really latches onto that original brightness and wishes we could see that translated to the Classified scale. The 25th Anniversary also went with the matte red over glossy, which is one reason why I label that as more of an inspiration than the ’85 original.

The sculpting on this figure is absolutely first-rate. The various textures throughout the torso, arms and legs really accentuate a feeling of multiple layers of real material in a way you just can’t capture at the smaller scale. I love that the buttons on his tunic are all raised, as are the ribbons and medals, making it clear that this is a unique figure, apart from the rest of the COBRA cadre.

When G.I. Joe: Classified first launched, I think there was a suspicion that they would heavily leverage existing tooling for updated figures, and while that’s certainly happened throughout the line, I’ve been totally thrilled with just how much new tooling they’ve used as well. I think a lot of fans suspected that the Crimson Guard might share significant re-use with COBRA Commander, but that’s simply not the case, a large amount of this figure uniquely sculpted and designed just for it (and its eventual Python Patrol repaint, among others). That helps make each of these characters really stand alone.

I also love their use of secondaries on this figure, the shoulder braid firmly attached, yet also separate, adding a key third dimension to the figure. The dual-strap belt, holster and sheath also give him some added realism. It’s the small touches, too– the helmet is a fantastic representation of the elite trooper’s look and those sleeves angle just over the back of the hands in the best way possible. Also, the figure just feels– bulky. His shoulders seem a bit broader than some others, the buck a little more solid. Just looking at the figure seems intimidating in only the best way.

Everything about this figure seems to have been designed and executed as a perfect representation of COBRA’s elite guard.

Absolutely spot-on. Because he lacks any sort of cumbersome belt or vest, the figure moves flawlessly throughout his torso range of motion. His double jointed elbows provide a wealth of options from standing at rigid parade rest to holding his various weapons in all sorts of great poses.

While the Crimson Guard look ceremonial, I still consider them some of the most highly trained combatants COBRA has, so it’s terrific that this six inch update can achieve so many great poses offering playability and poseability for almost any situation. I can’t wait until more people get these in hand and we see what some of the Instagram wizards can do with them!

Hasbro didn’t just hit a home run with this one, they hit a bases-loaded, bottom of the night game-winning grand slam. Every decision they made from an accessory perspective was exactly the right one they needed to make.

The Crimson Guard comes with his instantly recognizable rifle/bayonet combo complete with a removable magazine. Where we’ve had some challenges in past figures with the magazines staying in place, the design for the CG’s mag is perfect. It easily slips from its spot, but then equally easily slides back in and locks tight without risk of falling out and getting lost.

He has a great, realistic pistol and knife, a backpack, and a ceremonial sword and sheath. Here’s where some of the similarities between this figure and the 25th Anniversary version shine through again. In 1985, the Crimson Guard only game with his backpack and rifle, it wasn’t until some of the more modern updates where Hasbro thought to include the ceremonial sword (which looks fantastic, by the way) and the Classified update takes its inspiration from that decision. I’m glad they did.

As we’ve come to expect from Classified figures, there is a place on the figure for everything and even multiple places. The sword’s scabbard can fit either in a hole on the CG’s belt or on his backpack. The rifle can fit in a peg on the opposite side of the backpack along with the knife in its sheath and the pistol in its holster. He truly can hold everything.

If I have any questions it might be the choice of black for the backpack (the Crimson Guard has historically had a red backpack) and while the backpack is certainly a critical aspect of the character, the lack of clear shoulder straps that might hold the backpack on make it seem as though it’s sort of floating back there. Granted, that’s been an issue since day one, but it seems more obvious with the larger scaled figures.

Don’t get me wrong — I’m glad they didn’t ruin the aesthetic of the CG’s unique tunic with straps, but it’s just something I felt I had to point out.

What else is there to say about this figure? From head to toe, it hits all the exact right marks. Although they lean heavily into the vintage look, I absolutely love the look of the vintage CG and find few reasons to complain about that. The sculpt is terrific with a great, unique helmet, the layered texture throughout the body, not to mention the raised elements on his torso.

The color balance is a thing of beauty as well, the red, black and silver all playing great off each other.

Honestly, I’m finding it very difficult to think of anything to complain about here. If this is a sign of things to come for the Classified line, we are in for one heck of a treat.

I so wanted to give this figure a full five stars, though I had to drop just a bit for originality, considering it’s leveraging a nearly 40 year old design. Even so it’s doing it exceptionally well and the execution is about as great as one could ask for. Nailed it. 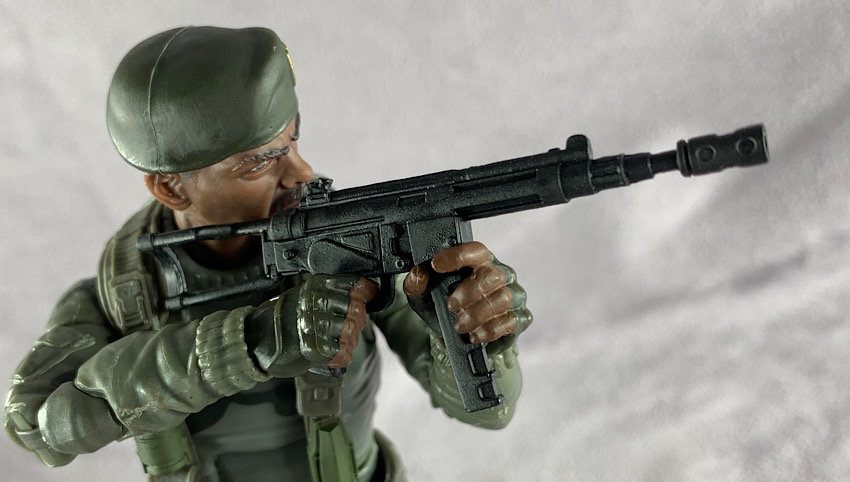 Seems these days it’s almost impossible to tell what the release cadence of G.I. Joe: Classified figures are. While Stalker and the Crimson Twins aren’t due for domestic release for some time yet, I was able to get a hook up from a friend who got their hands on them early, then promptly canceled my outstanding pre-orders. The global supply chain has thrown things in a bit of an upheaval, but in spite of that I’ve seen a relatively consistent stream of Classified releases in 2022, especially over the past month or two.

By all accounts, things are just going to pick up, so hopefully you’re all glued to Hasbro PulseCon in October to see what the fine folks with the G.I. Joe team have up their sleeves.

Something a little different to tackle today. Along with a recent influx in G.I. Joe: Classified figures, I also received my SDCC Exclusive G.I. Joe: Ultimates B.A.T. from Super 7. I will admit, I mostly bought it out of a sense of curiosity about what to expect from the upcoming Ultimates line and I’ll admit up front — I’m a little mixed.

The aesthetic is great, there’s a ton of fantastic accessories, but a couple of minor points that keep it from reaching an upper echelon status.

Check out my full review at the link below and depending on how things go, I may or may not regularly review these figures.