Being on the road for most of the day, I didn’t really get a chance to talk about the two big news stories that the Collectors’ Club dropped today in regards to the upcoming G.I. Joe convention at the end of the month.
Big story #1 – Voice actress Morgan Lofting, better known as The Baroness will be appearing in Orlando as a guest of the Collectors’ Club!  Very cool.  By far one of the most distinctive voices in the original Sunbow cartoon, this is a great coup by the GIJCC and she should make for some very interesting discussion. 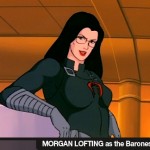 Big story #2 – Rare toy alert!  Apparently the Collectors’ Club incentive figure for 2011 will give fans an even bigger incentive to attend the Convention.  A very limited run of 600 Dial Tone figures will be available at JoeCon MINT ON CARD.  Normally sold in a sealed baggie as part of the Club’s promotion, some select figures will be carded and for sale at JoeCon.  Attendees will also have the chance to get these signed by Dial Tone’s voice actor Hank Garrett. 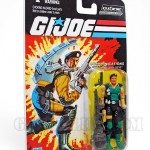 Two very cool bits of news.  If you want to read the full press releases, click the “Read the Rest of this Entry” link below.
END_OF_DOCUMENT_TOKEN_TO_BE_REPLACED

Over on the G.I. Joe Collectors’ Club Facebook page, a quick image of the upcoming JoeCon exclusive Claymore figure was revealed!  And it rocks.  I love the character as it is, and they have provided a really, really cool update.  I especially love the Special Forces emblem on his chest featuring “De Oppresso Liber” (to free the oppressed).
And he’s totally Magnum.

Excuse the quick and dirty Photoshop.  The real image is mirrored below, and can also be found at the aforementioned G.I. Joe Collectors Club Facebook page.

Great news coming in from the G.I. Joe Collectors’ Club!  Registration for the 2011 Convention in Orlando, Florida is now live!  Not only can you now register, but long gone are the days of fighting the fax lines, starting this year, registration can be accomplished through a new online interface.
Great news!  The convention set looks fantastic, Orlando is a terrific location, so what the heck are you waiting for?  Register now!

Full Convention Set Reveal to be posted next week at JoeCon site!

It’s a Merry Christmas for G.I. Joe fans, as the G.I. Joe Collectors’ Club has announced today that they will be posting images from the full convention set all week next week.  The full text of the email can be seen below:

I hope you are having a wonderful holiday season!

After listening to some concerns about starting registration just before Christmas we have decided to hold off until the first week in January.

However, we have a Christmas present for you!  Next week we will post ALL of the convention set photos for Mission Brazil II and Drive into Danger!

Watch the new convention site at GIJoeCon.con for updates all next week starting Monday!
Merry Christmas!
Brian
PS. Our offices will be closed December 24 and 31.”

Excellent! I’ve been looking forward to seeing some pics, and finding out we’re seeing all the figures for the regular set throughout one week is awesome news.  Can’t wait. As always, for full details, keep checking GIJoeCon.com.

Over on the GIJoeClub Message Boards, “The Commander” has posted yet another clue for the upcoming 2011 JoeCon Convention Exclusive set!

Sounds to me like we’re still talking about some  sort of Cobra jungle set…  and if they’re hiding, that would indicate camouflage.  And what’s the best camouflage Cobra has?  The Python Patrol technology rendered them completely invisible to radar and electronic detection… hmmm…  so at this point, we have three total clues:

So yes, it would certainly appear that a jungle themed battle involving two teams in camouflage would certainly apply.  I know Tiger Force is a popular suggestion…for some reason I don’t see it.  Python Patrol, though, that certainly sounds feasible.  Whatever it is, with the vast library of modern era tooling at their disposal, I think we’ll see some pretty cool stuff.
Continue hypothesizing!  The convention is relatively early in the year next year, so revelations should start coming soon, I would imagine.  Keep your eyes peeled to GIJoeClub.com for all the latest details!

With the JoeCon coming much earlier in the year next year, we’re getting some nice early hints about what to expect for the Convention set in 2011.  Thanks to “The Commander” over on the G.I. Joe Collectors’ Club forums (which members and non-members should really visit more often) we have the following clues:

The first clue was courtesy of the latest Collectors’ Club newsletter, while clue #2 came on the forums.  I’m loving what I’m seeing so far.  On the Convention request forums every single year, I’ve been practically begging for a jungle-themed set…certainly seems like this would be the year.
I have my own little guess, too…  on the Collectors’ Club forums a number of months ago, I hypothesized that if the Club was moving to the modern sculpts, they should consider a “Special Missions: Brazil” type of theme.  Use existing characters like Footloose, Dial Tone, Leatherneck, and Claymore, and do them up in jungle camouflage.  This would get the fans the 25th homage Footloose and Leatherneck they want, and would also help nicely develop the more obscure (yet awesome) Claymore character from the original Toys “R” Us Exclusive set back in the day.
It seems clear from the 2011 exclusive Dial Tone that the Club is thinking along these lines, so let’s see what further clues bring!  Once again, I strongly suggest fans visit the Collectors’ Club forums to stay abreast of all the upcoming convention updates.