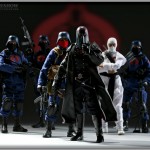 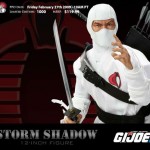 E! Online Video of The Pit, Night Raven, and Devastator

Big thanks to The Terror Drome for pointing out the following video from E! Online, which showcases a few Transformers and G.I. Joe toys, including the Night Raven and The Pit:

The last few days have been a whirlwind, and I’ve been trying to get up as much coverage and pictures as possible, and I’m still digging through notebooks for information as its needed.  Keep in mind when viewing the scores of Rise of COBRA product that this is  Hasbro’s main focus for 2009, and it should be.  With a 170 million dollar budget, this is a very critical point in the G.I. Joe brand, and this could either skyrocket it into the public conscious or it could negatively impact the brand for a long time.  Anyone who wants G.I. Joe as a whole to be successful should hope that the film does well, even if it’s not your cup of tea.  Heck, the film isn’t really my cup of tea, but I’m going to support it and I’ll be crossing my fingers that it makes a profit and maybe enough of a profit to give G.I. Joe the current “street cred” that Transformers now has.  I have a feeling it will be an uphill battle.

END_OF_DOCUMENT_TOKEN_TO_BE_REPLACED

So, even though I only stuck around for the Hasbro stuff, HissTank.com has been lingering around Toy Fair, and picked up on a few additional G.I. Joe related items of note.

Toy Fair 2009 – Tons of details about the Video Game

Along with sneak peeks at all the upcoming toys for the G.I. Joe: Rise of COBRA movie, we also got a chance to take a look at the video game in production at Electronic Arts, and had some opportunity to talk to some of the folks working on the game.  In those conversations, and in viewing the gameplay we uncovered a wealth of details about the upcoming production.

END_OF_DOCUMENT_TOKEN_TO_BE_REPLACED

This is a collection of everything else that was in the showroom, from Combat Heroes to Accelerator Suit Duke, and everything in between.