At any given time throughout 2015 it felt like a pretty slow news year for G.I. Joe, but as always, when you stop and look back, suddenly things don’t look quite so small.

Granted G.I. Joe product at retail was pretty much focused to a singular burst in late summer as the 50th Anniversary exploded, then faded, even though we got Convention product and FSS figures earlier in the year. With all that being said, it still feels like there were plenty of “banner moments” in G.I. Joe news for the year that was.

News was breaking right up until the last moment, and I’m actually a bit worried that if I post this prior to December 31st I might end up missing something!

END_OF_DOCUMENT_TOKEN_TO_BE_REPLACED

Whatever you think about the state of G.I. Joe throughout 2012, I don’t think anyone can argue that it was a slow year for news.  Quite the opposite!  Going from nearly daily reports of movie updates, to the downward spiral of G.I. Joe: Retaliation confidence, and finally finding some middle ground with the great regional gatherings of Joe fans and the countless great independent projects.

It was quite the interesting year for G.I. Joe, and in celebration of 2012, I’m picking the top 12 news stories for the year.  They may be good, they may be bad, but the end result is a collection of events throughout 2012 that paints a pretty cool picture when we look back on it.  Click the Read the Rest of the Story link below for the run down.

END_OF_DOCUMENT_TOKEN_TO_BE_REPLACED

I’m not 100% sure if it’s totally Facebook-free, but the SyFy game, G.I. Joe: Special Ops is now being hosted on SyFyGames.com.  It is still the Open BETA, but the game has been updated and upgraded, and you no longer have to hit up Facebook to get at it.

Check it out over on SyFyGames.com and let’s hope they’ve fixed some of the lag and bugginess of previous versions of the Beta. 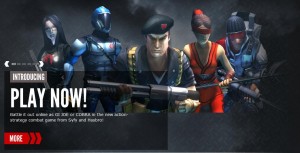 During the Hasbro presentation at GIJoeCon this past weekend we were treated to a special trailer for the upcoming online game G.I. Joe: Special Ops!  Over on their Facebook page, SyFy Games did the same thing so the rest of you guys can check it out as well.

Hit up G.I. Joe: Special Ops on Facebook, or take a peek at the embedded video below.

I’m between seminars at the moment, but wanted to at least get the slideshow images posted from the 2013 Product demonstration.  Many of these items will be in the display and I will get those images posted throughout the day as well, but wanted to get this AWESOME stuff up first.  Highlights:

More details as they emerge!  Follow me on Twitter for up-to-the-minute Tweets and posts from the SyFy panel and the GIJCC panel later today.