Did you ever want to go back in time?  Back to the simpler times…  back to the times before we found out G.I. Joe: Retaliation was delayed for nine months?

Now you can!  Hot on the heels of the biggest G.I. Joe story in years, we give you Episode 56 of What’s on Joe Mind where we discuss none of it!  In our defense, we have valid reasons for that, considering we recorded it before the news hit.  Regardless, there were still plenty of great things to discuss this episode, as we bring on Gary “Gyre-Viper” Head from the JoeDeclassified SpecOps Podcast to talk a little bit about the JoeDeClassified project and what convention attendees might expect to see at the booth.

Arune Singh from Marvel Comics joins us as well as we continue our pushed towards JoeCon and … err… crap.  As always, hit up our Podbean Page, or just check out the embedded player below.  Show Notes as usual are after the jump.

This almost seems like one of those “remember when” episodes.  Hey, remember how WOJM was before the movie got pushed back 9 months?  Remember how Gary used to count down the days until its release?  Well, at the time of this recording, our ignorance of what would happen in the next 18 hours is bliss and we gleefully report on the news with no idea that the biggest Joe news story of the year thus far was about to stare us in the face.  Regardless, it is a good show featuring friend of the program Gary Head who talks to us about what will be appearing at the JoeDeclassified.com booth at JoeCon.  Old friend, Arune Singh, from Marvel Comics jumps in to share in the fun.  From DER POST SACK, we answer mail about JoeCon t-shirt availability, a report from the Corpus Christi meet, and a listener suggests changes to Horrorshow to make him look more “bulky”.  In the second half, we get a listener review from LordEd about the 2010 Vacation in the Shadows comic.  In the news, former WOJM guest, Neil Ross, is a JoeCon guest.  We talk about how cool the 12″ set is and Justin reports on the latest from the GI Joe: Special Ops game.  So have a last listen of how it was before “the big announcement.”  Be sure to listen all the way to the end past the music for a small announcement from Gary.

Cobra Commander v45 (from the Mailbag):

Captain America Strikefire (from the Mailbag): 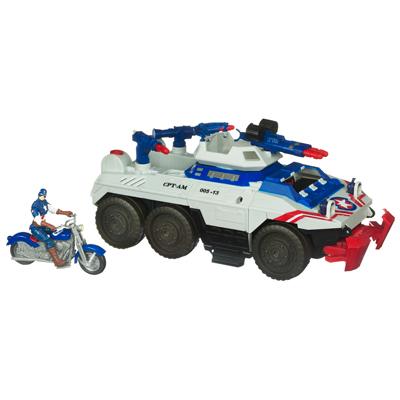