From the “this is news?” department… G.I. Joe 3 delayed, waiting for the Rock

With Byung Hun Lee out doing the interview circuit for his new film The Magnificent Seven, it’s natural that some questions would come up regarding his role in the G.I. Joe movie franchise.  Speaking with LRM, the Korean actor said that:

“…that there’s a possibility to do the third one, but I think they’re waiting for the actors’ schedules. They’re arranging the schedules for the actors, especially Dwayne Johnson.”

While it is nice to hear some talk of the next installment in the G.I. Joe film franchise, I don’t think it surprises anyone that they’re building the next installment around Dwayne “The Rock” Johnson.  Already one of the most popular actors on the planet when he filmed G.I. Joe: Retaliation, somehow the onetime wrestler has skyrocketed even further, recently pulling down the honor of the highest paid actor in Hollywood.  If G.I. Joe has the inside track to leverage Johnson’s billing for a third film, they would be painfully stupid not to do so.

At this point that means a bit of a waiting game.  When you’re one of the most popular action heroes of the current moment, a wait list generally forms, and Johnson right now has a hell of a long one.

Now the real question is, how does this play into the whole Hasbro Cinematic Universe discussion?  We’ve heard rumor upon rumor that Hasbro is trying to develop something for 2018, would that something include Dwayne “The Rock” Johnson?  That would feel like a logical step to take, but at this point it remains to be seen whether that would be considered “G.I. Joe 3” or something else entirely.

For many, many years a G.I. Joe film franchise was considered to be in development hell, and there was much rejoicing when it finally got the green light for 2009.  Two moderately successful films later, it almost feels like we’re back in that in-between area.  Hopefully news comes out in the next 12 – 18 months that changes this perception.

END_OF_DOCUMENT_TOKEN_TO_BE_REPLACED

As one might suspect with Dwayne “The Rock” Johnson as the current WWE champion, and also the feature lead in the upcoming G.I. Joe: Retaliation film, it only makes sense for World Wrestling Entertainment to play some role in promoting the movie.

In fact, both Adrianne Palicki and DJ Cotrona were at the Elimination Chamber PPV on Sunday night, and also appeared in WWE Raw last night to promote G.I. Joe: Retaliation.  Just how much this promotion will impact ticket sales is unknown, but with The Rock’s huge following (both within wrestling circles and outside of them) it can only help.

Click the Read the Rest of the Story link below for the full press release!

END_OF_DOCUMENT_TOKEN_TO_BE_REPLACED

Yep, I guess this confirms it, the promotion train is in full effect for G.I. Joe: Retaliation, hitting in March, 2013.  Along with the new trailer, we now have what appears to be an exciting relaunch of the GIJoeMovie.com website.

With exciting, action-packed transitions straight from the film, you can visit GIJoeMovie.com to see images, the trailer, and check out the story for this G.I. Joe movie universe.  Interestingly, the story link seems to be telling the story of G.I. Joe: The Rise of Cobra.

Check it all out right now at GIJoeMovie.com. 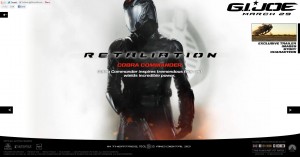 So, the Yahoo Movies trailer was cool and all, but the GIJoeMovie YouTube channel just posted a full HD version of the latest G.I. Joe: Retaliation trailer, and it’s pretty awesome.  Check it out on YouTube, or embedded below.