There’s been some hubbub about the G.I. Joe: Retaliation release date (yes, even above and beyond that pesky 9 month delay).  The initial release date was March 29th, which is next Friday.  Then trailers and TV Spots started mentioning March 28th, and I think most folks (myself included) assumed that meant late night showings for the 29th premiere.

Then scattered mentions of March 27th started spreading out there, and I confirmed with a few theaters in my area that the film would actually be released on March 27th.

But, wait.  That’s not all.  I hit up Fandango pretty regularly to see when local showings are, and as of yesterday evening, I was able to purchase a ticket for a 7:00pm show on March 26th.  Other GeneralsJoes readers are confirming the information.  So if you’re as excited as I am to see G.I. Joe: Retaliation in theaters, I strongly recommend you hit up your favorite theater’s website, or Fandango.com and check that release date.  You may get your G.I. Joe: Retaliation fix even earlier than originally suspected.

Heck, we’ve waited nine months, I’ll gladly jump at the chance to catch it a couple of days early! 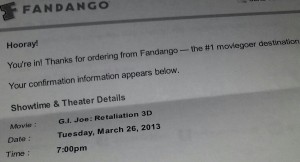