Good morning, G.I. Joe fans!  Well for folks who are eager to know what all the little details are for the upcoming G.I. Joe: Retaliation film, I have got a treat for you today.  Paramount did some footage screening for some very select individuals over the past week or two, and GeneralsJoes is lucky enough to have a few reports of that footage for you today!

A big friend of GeneralsJoes and the What’s on Joe Mind podcast Dave Tree from Roll Out Roll Call got to see this footage live and in person, and he did some fantastic work getting this intel dissected and reported to us.

Please keep in mind that some of the footage descriptions you read below could be considered spoilers!  If you are looking to go into the film clean and pure, you may want to avoid reading this post.  If you want to know as much as humanly possible, click the Read the Rest of the Story link below to read the full details!

The presentation started with a short statement from Producer Lorenzo Di Bonaventura saying he is very excited that they are now so close and it is all hands to the deck for the home stretch before the film release.

The footage opened up with an extension of the Ghost Hawks 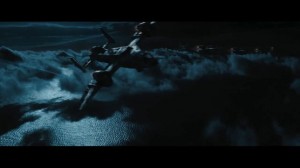 The Joes are in the desert and unloading warheads, Roadblock and Duke are talking when Roadblock notices a firefly bug buzz past him, at this point the attack happens.

Flint, Lady Jaye and Roadblock escape by jumping down the well, gunmen fire down the well and you see bullets whizzing past them.

They each link arms and back to back climb up the well shaft using their legs and pushing against each others backs. They nearly fall back down the well near the top when the formation breaks apart.

They find the carnage above and realize everyone is dead. 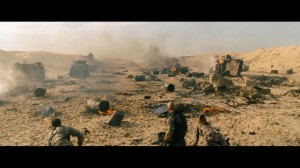 Shot of Snake Eyes who looks to have been captured independently.

Zartan is talking to the President gloating that his opinion rating has actually increased since he took over, he gets a blade and cuts his face which then reacts to the nanomites repairing and resembling back to the real President, much to his horror.

A long road at night, a bike front wheel pulls up with a cobra logo and guns fitted to the front half of the bike. A tube device is taken out, extended and dispatched out are hundreds of robotic Fireflies. they drift down the road to a guards gate, and look on appearance regular bugs. A shot of a handheld unit sees that the owner of the bugs is guiding and receiving transmissions from them, the bug fly past the gate and then all look to explode, blowing apart the guard gate etc.

Inside Storm Shadow is contained within a tube, he slows his heartbeat down to zero and the doc/ guard rushes to save him, at which point Storm Shadow wakes up. Outside the room, the main Prison Controller realizes it might be a trap and mobilizes guards to investigate, when they go in they find the Doc dead in the tube and realize Storm Shadow has escaped who then surprise attacks the guards. 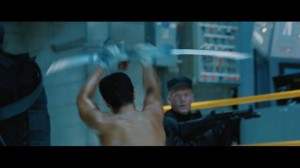 The tube with the Doc is broken and the fluid is all across the floor, Storm Shadow kills all the guards and turns to the main prison controller to kill him. Quick thinking by the Prison Controller, he grabs the defibrillator paddles and uses them on the floor stunning Storm Shadow, the Controller makes his escape and locks the door.

Storm Shadow, smashes one of the other tubes. 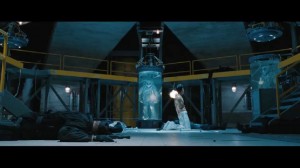 A horribly disfigured man falls across the floor gasping for air, grabs the mask in front of him and places it on quickly so he can breathe. Man gets up and you see the mirrored visor and it’s Cobra Commander.

Outside the bike heads towards the doors, splits apart in midair and blows a whole in the wall. Firefly uses a parachute to help slow him down after jumping off the back. He walks towards the hole he has made and coldly shoots the guards that are injured from the explosion whilst walking past them.

Inside the Prison Controller has mobilized more troops to take down anything that comes out of the prison room, however explosive devices roll past them from behind taking them out.

Storm Shadow leads Cobra Commander out, saying that plan for his release has gone according to plan and they meet Firefly. 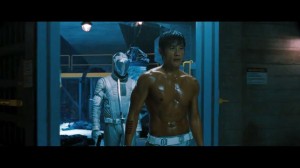 We then cut to extended footage of Cobra Commander, Firefly and Zartan on a balcony overlooking the loading of what looks like warheads on to a satellite: 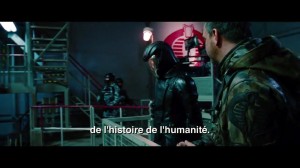 The satellite is deployed in space and the President is giving ultimatums to the nation of the world to hand over control or else there would be grave consequences: 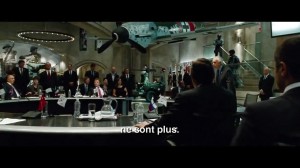 We cut to a high altitude shot of London, which then gets blown up with buildings crumbling: 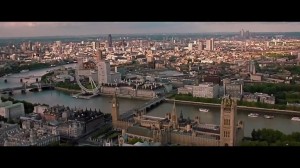 Cobra takes over the White House and within this sequence, we also see some really cool HISS Tanks that are based on the Pursuit of Cobra HISS Tank design (I think this may have been glimpsed on the trailer:

Cobra Commander is aware 3 Joes have survived and he deploys Firefly to find them.

The 3 surviving Joes are looking at their options, Roadblock says ‘There is a reason we are called Joe’ and you see them pull up outside a suburban house and walk to the door. The door is ajar and the team walk inside to investigate, located in the kitchen the 3 are looking around and coming into shot behind them out of focus is Joe Colton from the ceiling. Joe then supplies the team with equipment, which is all stashed away including the RipSaw tank.

There are several action shots that may relate to the freedom of Snake Eyes, we see Snake Eyes back at Joe Colton’s where he also supplies weapons to Snake Eyes. There is then some audio saying ‘If Storm Shadow is still alive he must be brought to justice’, at which we see what looks like Storm Shadow on an operating table with laser surgery performed on his back.

Storm Shadow gets close enough and a full on sword/ martial arts fight ensues. This is really full on and within this there are several shots that are cut showcasing the Red Ninjas on the cliff-face. There is an insane shot of Snake Eyes on the cliff reaching the ledge of the dojo where several Red Ninjas are waiting, Snake Eyes realising he is in real danger grabs what looks like a flare gun and shoots directly into the ledge above the Red Ninjas creating a huge avalanche.

Please remember that this footage was seen only the once, so specifics might be slightly incorrect and the order of the the footage shown may not be the same sequence in the final film, however the reaction was awesome and left you wanting so much more – rather than feeling that perhaps you have just seen all the best parts crammed into 10 minutes.

Obviously I want to give a huge thanks to Dave Tree for taking the time to type this all up.  This was a lot of work on his part, and he did me a solid to get this in such a great format.  Obviously a lot of these details were revealed during the trailer airing tonight, but this in depth perspective is fantastic and much appreciated!