A possible hint of Arnold Vosloo in G.I. Joe: Retaliation?

I know this could be considered grasping at straws, but I honestly think that there’s a valid point here, too.  By now we’ve all seen this new trailer footage a few dozen times (at least) and one of the most striking scenes is the scene where Zartan (disguised as the president) slices his face open, and it heals up behind the blade.  We get a cool blue skin homage that only lasts a couple of seconds.

Well, GeneralsJoes reader ghost man decided he might have seen something…so he did some screen capture comparisons and sent them along.  Check out the image below. 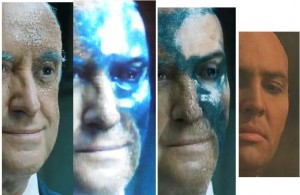 Now, I’ve already been accused of dissecting this film footage way too much on the site by someone, but I thought this was just a fun note to point out.  Take a look at the second-to-last image, and look at Vosloo right next to it.  I’ll be damned if that’s not a close match.  The shape of the jawbone, the narrow smile…even the eyes.  Sure, it may just be a computer generated fabrication, but if nothing else, it indicates that possibly Zartan can change back, and perhaps we’ll see Vosloo somewhere along the way.

A very interesting comparison, and a big thanks to ghost man for sending it along.  Yes, I fully admit I am way too invested in this film and this property, but it’s not like a blockbuster summer film comes along every day.  I will happily take apart every single second of it.

UPDATE – Some folks have been reminding me that IMDB has Arnold Vosloo listed as a cast member.  Please keep in mind that IMDB does allow user-edited content (like WikiPedia) and isn’t always accurate.  After all, as of a couple of weeks ago, they had “Zandar” listed as a character in the film as well.  He very well might be, but for some reason I’m not betting on it.