I know the prevailing wisdom from the fandom in the days after the G.I. Joe: Retaliation figure reveals is one of doom and gloom.  Reduced articulation on the handful of driver figures automatically means “deth of teh line” right?

I don’t think so.

Don’t get me wrong, I’m plenty annoyed with the articulation reduction in the vehicle drivers as well, but that doesn’t mean the entire line is doomed for failure.  I’m taking this moment to reveal my “Top 5 Reasons to look forward to G.I. Joe: Retaliation toys”.  The purpose here isn’t to artificially inflate the coolness of the driver figures, or to gloss over the fact that Hasbro felt it necessary to go in that direction, but instead bring a focus onto the good things that might be hitting shelves this spring.

Yes, the reduced articulation on the vehicle drivers is a bummer, I will not deny that.  But just because some select figures can’t move as well as some others doesn’t mean the entire line is a loss or a waste.  There are plenty of cool things to expect on store shelves this spring, for Joe fans of any era.  This is just G.I. Joe: Retaliation, I’m not counting the SDCC Exclusives here.

With the release of the fantastic G.I. Joe: Renegades/30th Anniversary Storm Shadow, I was pretty sure we didn’t need another released any time soon, but this version has proven me wrong.  While last year’s excellent offering presented us with a perfect and timeless version of our favorite Cobra ninja, this G.I. Joe: Retaliation version seems intent on catapulting us into the future.

It takes the awesome white themed ninja, and with some very creative design tweaks gives us a terrific looking figure that works in a cutting edge modern environment, which suits the whole 21st Century Cobra concept perfectly.  He appears to retain his full level of articulation throughout as well, and the assorted gray trim and padded uniform breaks up what could have been a somewhat bland figure nicely.  Even with around 30 Storm Shadow figures released in the 30 year history of the toyline, I find some things to love here and will be eagerly anticipating this guy’s release. 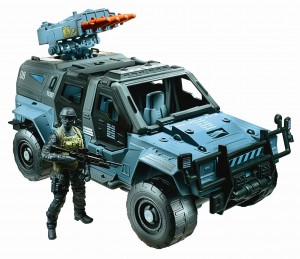 Yes, it’s a retool of the Pursuit of Cobra and 30th Anniversary VAMP, but the retools are all in the right places.  Giving us some very nicely detailed door panels, a roof panel, and a great looking contained rocket launcher, the utility look of the previous VAMP has given way to a well-armored and aggressive looking combat vehicle, which is much appreciated.  Personally, I’m curious to know if any of those panels come off, and if there’s the possibility of customizing the vehicle with previous VAMP attachments.  If so, I could see this being a very interesting template for future convoy alterations.

Even with the restricted points of articulation on the driver, I think the size, durability, feature set, and overall look of this VAMP update are all enough reasons to look forward to the vehicle and eagerly await its release.  I do hope the Arashikage symbols are removable stickers…if not, I may be breaking out the acetone.

So, what’s not to love about this thing?  Sure, it comes with Duke, and that Duke figure will most likely feature the restricted articulation that the other drivers do, but this little plane is AWESOME.  A very sleek and fast looking single-pilot fighter, the Ghost Hawk II really feels like a G.I. Joe plane.  It feels like something we would have seen injected into the G.I. Joe universe at some point over the past several years.  It’s got some elements of the Howler, a similar design aesthetic as the awesome Black Dragon (but it is definitely not the same tooling) and is loaded with offensive firepower.

I really love the thruster configuration, and feel like this is one of the more inspired vehicles we’ve seen in recent years.  Within the confines of PoC and the 30th Anniversary, there was an effort to make even new  vehicles somewhat resemble old ones, and seeing something so refreshingly new and cool is a great feeling for the G.I. Joe: Retaliation line.  If you can overlook the 5 POA Duke and toss in Ace, Lift Ticket, Tomahawk, or anyone else, you have a terrific updated aircraft fighter.  I love it.

Taking the lead from the Steel Brigade, Hasbro has ramped up the concept of a G.I. Joe troop builder and done it in a fantastic way.  Whatever your thoughts are on a G.I. Joe trooper (and I’m generally not crazy about the idea) this figure does that job quite well.  His design is fairly basic military, yet enhanced enough to work within the G.I. Joe universe, and he is loaded with great accessories.  I love his machine gun, I love that funky looking gas mask, and I love that Hasbro tries to insinuate that a blue cape might be sufficient disguise to blend in with Cobra.

I’m very surprised that I have latched onto this figure as I have, but I am immediately finding ways to work it into my ongoing G.I. Joe story, and I think it makes for a very cool figure.

And this figure has officially won my “most looking forward to” award… Zartan.  As one of my favorite characters in the history of the G.I. Joe mythology, I am surprised by the lack of great, iconic figures that Zartan has received.  It has gotten better lately with the Resolute Zartan and the Pursuit of Cobra Zartan both being very cool, unique, and interesting ways to build upon the character, but by and large most updates have fallen flat in my mind.

Well, that changes here.  Of course what pleases me the most is the heavy apparent influence from the Renegades universe that this figure has.  The body suit and hood configuration is almost exactly the same as what we saw in G.I. Joe: Renegades, yet the figure is layered with some nice armor to set it apart.  He has the sickly green skin and funky eyes from the Resolute version, and really just looks like one heck of a cool update to the Cobra Master of Disguise.  If there are any down sides, a lack of ankle articulation might be one, but we’ll have to wait and get it in hand to confirm that one.  As it stands, this is a great figure and one that I am especially looking forward to.

I know it’s status quo in all fandoms these days to latch onto change and freak out about it, for fear that this change will somehow impact how you view the entire toyline.  If I’ve learned anything over the past 30 years its that it is far easier to take what you like, leave what you don’t and look forward to the brand’s direction.  Just because the vehicle drivers have reduced articulation that does not mean the rest of the figures will end up with 5 POA, as I know for a fact that Hasbro views articulation as one of the most important hallmarks of the G.I. Joe brand.  It’s easy to focus on the negative and overlook that there are some cool toys coming out this year, even among ones saddled with five joints.

I’ve covered my five favorites here, but didn’t even touch on Snake Eyes, Cobra Commander, the Red Ninja, Roadblock, the Ninja Showdown sets, or the HISS Tank, all of which look to be very cool additions to my G.I. Joe ranks.  The way I look at it, vehicles have been consistently downplayed in recent years, to the point that we only got three vehicles on store shelves over the past year.  If creating a new figure style was what Hasbro had to do to get these vehicles potentially in kid’s hands, then that settles it, but rest assured I will be asking Hasbro this weekend what their thought process was and why tooling these figures is cheaper than simply doing repaints.

I know I for one would have much preferred repainted figures with full articulation over newly tooled figures with less, but perhaps there are manufacturing costs to consider as well.  Time will tell.  In the meantime, I fully intend to continue looking forward to what I like in the Retaliation line, and holding Hasbro’s feet to the fire on the things I don’t like, but only in the most adult and respectful way possible.

I strongly encourage you to attend JoeCon if you don’t like what you’re seeing and express your opinions face-to-face.  It will go a long way.