Kwinn is a name I heard quite a bit throughout the G.I. Joe show room area, which I think is a good thing, because I’m not entirely convinced everyone within the Hasbro design team realizes just how much the fans want this figure.

I spoke with Derryl DePriest at length about Kwinn today at the Hasbro event, and he remained adamant that Kwinn was tooled up and that they are determined to find a place for him in the line.  Toy production is always a give and take process, whether you’re in finance, manufacturing, management, or design, and sometimes you have to give a little to get a lot.  I’m under the impression that they are still in “give and take” mode with Kwinn and sort of battling to figure out where to get him into the line.

Obviously, looking at the new figures we saw today, Kwinn just doesn’t seem to fit among mainstream retail offerings.  He doesn’t have next gen body armor, he is clearly from a different era in G.I. Joe’s history, and he really doesn’t mesh with the whole G.I. Joe: Retaliation concept.

That being said, there is still the possibility that we’ll see Kwinn at New York ComicCon as an NYCC exclusive.  That rumor has been going around quite a bit over the past several months, and the fact that GIJoeClub.com mentions an NYCC Exclusive only seems to confirm the possibility.  Time will tell, but rest assured, folks within the G.I. Joe design team are trying like heck to get Kwinn to retail, hopefully they will succeed. 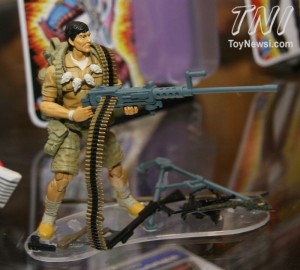