Wow.  Who would have thought when we woke up this morning that we would not only be getting the Super Bowl trailer for G.I. Joe: Retaliation, but also our first look at the new toys from the film today as well?

Serious kudos to Brian Truitt from USA Today for getting this story together and totally rocking the G.I. Joe universe.  So, the initial pics hit, and I rushed around getting the news out there, but perhaps a little more careful analysis is warranted.  This is a totally new universe after all, a pretty new aesthetic, and something pretty different from what we’ve seen from the film designs.  It almost seems like Hasbro is using Retaliation as a catapult to launch into a more widespread G.I. Joe line that’s not necessarily dependent on the film aesthetic.

I love it.  With figures taking some serious inspiration from science fiction, an animated aesthetic, yet with some real world parts and pieces, early opinion is a lot of the elements that I love about G.I. Joe.  A closer look at Toy Fair will hopefully provide more educated opinion.  Now that I’ve taken a few minutes to digest things, here are some of my thoughts.  Keep in mind, I have a feeling these figures don’t necessarily represent the characters how they will appear in the film.  They seem considerably different.  I find myself perfectly okay with that.

Click the Read the Rest of the Entry link below to see all my thoughts.

A great likeness of Dwayne “The Rock” Johnson and an absolutely ripped sculpt.  Holy cow.  Some serious musculature throughout that figure with a ton of little details, especially considering how relatively plain the overall design is.  A fantastic, very basic military figure in impeccable detail.

However, a concern.  What is that in Roadblock’s right hand?  Doesn’t really look like a gun.  Not only does it not look like a gun, in the close up image, I don’t see a wrist joint and I don’t see any separation of the fingers from the grip of that…  whatever it is.  Nobody throw tomatoes, but it looks to me like Roadblock has something permanently afixed to his hand.  Don’t kill the messenger!  Check out the close up picture below: 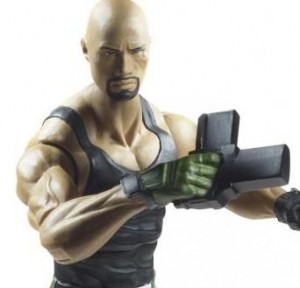 Am I wrong?  Are others seeing this?  Something to keep an eye on at Toy Fair.

Proof that you can reinvent a character and a figure without totally flushing the classic appeal.  While I kind of liked the Rise of Cobra and Pursuit of Cobra versions of our faithful terrorist leader, I won’t claim that they honored the vintage look and feel of the character.  In this case, though, I love it.  The helmet design is certainly a traditional homage, but with some nice new twists, including the great serpent fangs and angular design. Lots of detail throughout the baggy uniform giving the figure a solid, imposing appearance.  A very nice looking figure overall.

Okay the Cobra Trooper is a little wacky, but mostly because he’s at a strange angle.  His grenade-holding webgear straps are pretty big and clunky, but I love the colors (going back to a more blue/gray look) and his gask-mask integrated head sculpt design is pretty bad ass.  Working holster is intact.  Very interesting design, certainly different from the film look, but still cool and a nice new direction.

If any figure shows a clear separation from Retaliation movie design and a more science fiction or animated feel, it’s Duke.  Totally bucking the film trend, even with Channing Tatum’s head sculpt, we get a Duke that goes whole hog into the technology realm with a full green bodysuit, layered metallic armor and a honking brown rocket launcher.  A big step away from the more traditional looking Duke figure, this once again seems to support the idea that Hasbro is using the film as a jumping off point into a true future generation of G.I. Joe, which works on many levels.  This is a very neat looking Duke, but a very different looking one as well.

Well if the Pursuit of Cobra and 30th Anniversary Steel Brigade figures began eased the pain of the G.I. Joe army builder idea (which I wasn’t a fan of) this guy totally cures me.  Throughout the majority of my Joe collecting life, I’ve never been a fan of G.I. Joe themed troops, but I’ll be damned if I’m not coming around.  This figure is suited for action!  A very nice generic green uniform, awesome looking helmet, and a ton of great looking gear (love the holster on the backpack!) this is a really nice looking new trooper figure that has some great potential down the line.  Love what I see here.

Looking like a total head-to-toe repaint of the 30th Anniversary Storm Shadow (which I’m totally fine with) this figure obviously has all of the great things about that figure as a part of this one.  It will be interesting to see what weapons he comes with, and considering how different the film Red Ninjas look, whether another Red Ninja will be in the toy line’s future.

Sleek, black, with a hint of armor throughout the figure and some very nice baggy, military pants, this is one VERY cool looking Snake Eyes.  Certainly not on the same uber-military level as the Pursuit of Cobra version, but with his own super-hero charm I really like this rendition of the G.I. Joe ninja commando.  He doesn’t have the huge webgear, flak vest, or over abundance of military ruck, but he is still a very cool looking Snake Eyes figure that I really dig.

Wow.  Wowie wow wow wow.  Look at this version of Storm Shadow.  Absolutely awesome.  White ninja aesthetic as we all expect, but with some fantastic gray trim throughout the uniform adding really cool detail and a great futuristic element.  The insanely baggy legs on the uniform are a great throwback and I’m thoroughly enjoying the looks of this figure.  Before 2011, I was certain I never needed to see Storm Shadow again, now with the 30th Anniversary version and this one, we’ve gotten two terrific ones back-to-back.  Win!

Hello!!  Yes, ladies and gentlemen, this looks like a Renegades Zartan!  No, it’s not 100% accurate, but it’s damn close enough to work for me, and I am THRILLED.  If this is some indication that we might see more Renegades infused designs throughout the Retaliation toyline, I am totally on board with this.  Very awesome and sleek uniform, I love the look of the hood, and his nasty pale skin is totally evocative of his Resolute version.  Several great Zartan elements all worked into a single figure.  Hot damn!

Now, I would caution folks to get too excited about seeing characters looking like this in the film.  I would hazard a guess that this initial run of figures is NOT inspired by how they will appear in the movie.  Once again it would seem Hasbro is using this as a jumping off point into kind of a new era of G.I. Joe, which I’m all for.

Another thing to watch out for.  Several of these figures seem to be missing ankle joints.  As we saw with Avengers last week, and as I’ve been warning on the Whats’ on Joe Mind podcast, these are some things we need to watch out for.  We can’t expect the insanely high level of collector themed toys we’ve been getting over the past 2 years, especially with movie royalties being taken into consideration and adding to the cost factor.  We just have to prepare ourselves.

But man. These figures look amazing. Hasbro has taken the Joe property and revamped it once again, this time with a heaping helping of vintage flavor, and we’re getting some great looking new toys to drool over.  Well played, Hasbro.  A huge thanks to Brian Truitt over at USA Today for the intel and the pics, and for allowing me to host some images here as well.  He does his nerd brethren proud.