While I have no plans nor intentions to be a news site related to Marvel toys, I figure since I linked to a post about the movie Deadpool figure at MarvelousNews.com yesterday, I might as well post a follow up, because a poster on ToyArk.com scored some MUCH better pictures of this figure.  Once again I’ll put pics after the break so as not to spoil anything.

As expected the revalation of this movie version of Deadpool has caused a fandom-rampage.  This can’t be Deadpool!  He’s not wearing a red mask!

I’ve said it numerous times before, and I’ll say it again.  As long as the character remains true to the spirit of the comic character, I couldn’t give two craps what he looks like on screen.  Let’s face it, Hollywood is simply never going to put a priority on comic book costumes on the big screen.  It’s not worth it.  The Dark Knight was a fantastic comic book movie because it was a great movie, not because Batman’s on-screen costume was accurate.  Daredevil was widely panned, not because he wore leather instead of spandex, but because movie-goers and critics had issues with the plot, dialog, and direction.  Superman: Returns contained a very comic-accurate Superman…and you know what?  It didn’t matter, because the movie sucked.

Sure, Spider-Man looks just like Spider-Man.  Kudos to Sam Raimi and Sony for making that happen.  But the movie wasn’t great because he looked like Spider-Man, it was great because the character worked on screen and the guys behind the cameras are doing their job well.  Personally, I would hope that the directors, producers, etc… would put a lot more stock in the script and the style and not get too worked up over making sure the costume is 100% comic book accurate.

I think this version of Deadpool looks pretty interesting.  I’m not wild about the blades on his arms, but he looks badly scarred and disfigured, which fits in with his comic backstory.  I think this look will translate pretty nicely on screen, and I really am looking forward to the Wolverine: Origins film…a lot more now than I was a few months ago.  Every trailer or clip I see makes me feel a bit better about it, even if it felt like X3 “jumped the shark”.  I’m gonna give it a shot, and I’m not going to take any points away because Deadpool’s not wearing red tights.

Pictures are below.  Once again, thanks goes to ToyArk for the news! 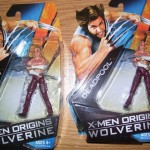