The Rise of Cobra Sky Sweeper was one of my favorite vehicles released in that line, which is surprising since it leverages so many elements from the COBRA Firebat.  Obviously the entire core of the vehicle is the Firebat, with the addition of some gun-mount skids and external engines, which honestly make a lot more difference than one might initially suspect.  They take an iconic and unique COBRA vehicle and make it look different enough and cool enough to appear completely separate.

Ever since I got my first Terror Drome for Christmas in 1986 I’ve been infatuated with the Firebat.  A small, nimble, and potent vehicle, at that time it was one of COBRA’s only real viable air-to-air attack craft.  The Rattler was a bomber (though not really treated as such) and the Night Raven was a high altitude surveillance plane, which left the Firebat controlling the skies.  The fact that it was small enough to comfortably fit my 12 year old hands and the functionality of the Terror Drome launch silo only helped things.  It remains one of my all time favorite vehicles 30 years later.

It’s no surprise then that the G.I. Joe version, with some added enhancements, retains a good deal of the charm and joy of the old school Firebat.  The rounded, sleek shape, awesome sculpted armor panels and the fold-up wings all remain intact with this vehicle, but some minor tweaks have greatly improved parts of it, too.  Blocky external engines are now mounted on each wing, adding a sense of “oomph” to the vehicle, and in a much more subtle adjustment, sculpted guns on skids enable the vehicle to land more logically and add some great firepower.

Since this is a Sky Patrol version, obviously the main color scheme here is a very vibrant and shiny metallic silver, an especially eye catching and interesting color scheme, balanced off nicely by black trim on the wings and a great shade of olive green throughout.  The Sky Patrol logos break up the blank spaces very nicely and I am always in favor of tampos over decals.  This version of the Sky Sweeper maintains the spring-loaded missile launchers on the wings, but compliments those with the standard Firebat rockets to offset the gimmick (which really doesn’t look all that gimmicky to be honest).

Speaking of gimmicks, the Collectors Club has fully admitted it was a mere coincidence, but if you wedge the Sky Sweeper between the tail fins of the Sky Striker, it fits in there and holds almost as if it’s meant to.  A neat little touch, an homage to the Sky Patrol Night Raven (even though that plane actually didn’t come with its drone), and a way to tie the two air vehicles together.  Neat!

The Sky Sweeper is a very fun addition to your Sky Patrol arsenal.  It’s a small vehicle with a very pleasing design aesthetic complimented by equally pleasing and vintage themed Sky Patrol colors.  I really dig it, in fact, I like this vehicle far more than the Skystriker.

Using the template from the Rise of Cobra Sky Sweeper, the G.I. Joe Collectors Club gives us a really nice and exciting new vehicle for our Sky Patrol armory. The small and sleek Sky Sweeper is an excellent compliment to the larger Sky Striker, and the very nice color scheme only serves to help things along. Far and away my favorite vehicle of the 2016 Convention Set.

And like with the first, an online site has a sneak preview!  This time around it’s i09.com and you can check out the first handful of pages from the Retaliation prequel #2 right here.

I just checked them out, and…  I’m interested!  I thought the first issue was fine, but nothing mind-blowing.  The second issue, though, looks like it ties Mainframe and Roadblock’s backstory together nicely.  And holy crap Sky Sweeper!  LOVE IT.

I’ve mirrored one of the pages below, be sure to hit up i09.com for the rest. 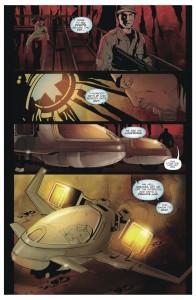 We’re used to seeing Alex’s unique viewpoints on various Rise of COBRA figures, but now he’s tackling a vehicle as well with the very cool G.I. Joe Sky Sweeper.  A Firebat repaint/retool, this is an awesome minijet plane with some very cool details that I hadn’t noticed before.

I especially love those landing skids with the heavy firepower mounted on each ski.  A very cool touch that I hadn’t noticed previously.  Anyway, I’ll let the rest of the pictures speak for themselves.  The original thread can be found on JoeBattleLines.

HissTank has posted some new boxed images of upcoming G.I. Joe: The Rise of COBRA vehicles.  We’ve seen most of this before in pre-production form, but a lot of the figures were swapped around and no one really knew their proper names.  Well, now we know.  Pictured below is:

Also pictured is the four figure Target exclusive “Rescue Mission” set.  Check out the original thread here, and the images mirrored below.

I’ve also added all of the above images to the Rise of COBRA Toy SuperPage in their appropriate places.