Wow!  Once again, huge props to Chris McLeod from The Full Force who has come through HUGE upon returning from his whirlwind trip to JoeCon.  He was kind enough to send along video reviews for all of the rest of the JoeCon exclusives and they have all been posted to the GeneralsJoes YouTube Channel.

I couldn’t make JoeCon again this year, a fact that I was quite disappointed about, and Chris came through in a massive way.  Huge thanks to Chris from The Full Force and check out the embedded videos below.

GIJoeCon website shows off more details from the 12″ exclusive set

Secret Mission to Dragon Island is setting itself up nicely to be a very cool 12″ set that continues the mythology of the 12″ Adventure Team line and brings it more in line with the Real American Hero universe as well.  The G.I. Joe Collectors Club posted a few more images from this 12″ exclusive set to GIJoeCon.com featuring the terrific Hazmat suit for evil villain Sebastian Gorman.  The suit features an awesome rendition of the Black Dragon logo that we’ve seen on various items since 2003.

Check out the update on GIJoeCon.com! 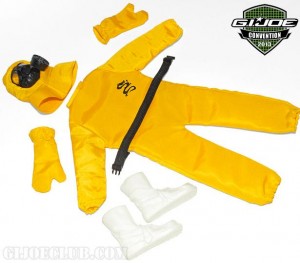 And the crowd goes wild!

We’ve been getting flooded with some very cool Oktober Guard themed reveals over the past week or two, but many folks have been clamoring for more information about who the Oktober Guard will be facing off against.

Well, the G.I. Joe Collectors’ Club revealed that today with the Iron Grenadiers!  We get a great revelation of the Iron Grenadier trooper himself and also some details about the story line itself.  For folks who don’t recognize the figure itself, it was originally planned as part of 5 Pack of Iron Grenadier figures from the Rise of Cobra/Pursuit of Cobra line, but never got released.  The image for that original 5-Pack can be seen at this post on GeneralsJoes.  I’ve also mirrored that image below:

As for the story itself…  check out those details below:

“By popular demand, the 2012 convention set stories and enemy factions are revealed…

Okay…now THAT is bad ass.  They give themselves an “out” for the dead Oktober Guard members by talking about declassified documents.   Of course I misread this, and it’s the Oktober Guard general who is being rescued.  Not sure what the angle is there…

Wow.  The possibilities are endless!  I cannot wait to hear and see more!  Check out the Iron Grenadier figure below, and keep your eyes on GIJoeCon.com for the latest intel!

And the hits just keep on coming!  Hot on the heels of their stellar reveal of the 2012 Convention Exclusive Daina figure, we now have the reveal of the equally awesome Schrage!

With another awesome new headsculpt, nearly perfect parts choices, and a fantastic accessory compliment, we are getting yet another home run in what looks to potentially be a landmark convention set.

Another interesting thing to note…  I’m not sure how many other fans have been wondering, but I was kind of curious if the Club would be dipping their toes into the “dead Oktober Guard” waters considering their comic book mythology seems to walk in line with the Marvel Universe.  Daina is still alive in the Marvel mythology, but Schrage is not!  This confirms that those characters are not off the table to the Club and reinforces the thoughts that we may just get a full compliment of modern era Oktober Guard characters.

UPDATE – When I say “full compliment” I’m talking about the original 6 members (Brekhov, Stormavik, Schrage, Daina, Horror Show & Dragonsky) and not really considering guys like Gorky, Misha, or even Wong.  Looking at the reveal page for the Con exclusives you see 6 empty spots for the Russians, so that seems in line with their thinking as well.

BAD. ASS.  Check out GIJoeCon.com for details, and take a peek at the mirrored image below.  Absolute perfection.

As if the barrage of G.I. Joe: Retaliation character posters wasn’t enough, now via their GIJoeCon Twitter Account, the G.I. Joe Collectors Club has announced that they will begin revealing convention figures at noon (Pacific time) TODAY.

Hit up GIJoeCon.com and sit there for the next 40 minutes like I plan to and buckle your seat belts.

This sure as hell is looking like the summer of G.I. Joe!