This is one of the cooler parts of JoeCon, really sorry I missed it this year.  Watch hundreds of 12″ Crimson Guards go plummeting from the rooftop with their parachutes!  Check it out on KansasCity.com.

Still waiting patiently for pictures from the Sales and Display floor, but to whet our appetite, It’s All True.net has posted a few images.  The one of most notability is Beachhead:

Lots of stuff planned for 2010, and Hasbro covered a huge amount of it at their 2010 Marketing Panel.  Folks from The Terror Drome and JoeBattleLines were both there and provided up-to-the-minute coverage via Twitter and Cover It Live!  This is what we know:

I’ve mirrored a sampling of round table images below…more to come from the sales floor!

Coverage from the 2010 Marketing panel at JoeCon!

Info is coming fast and furious from the 2010 Marketing Panel at JoeCon…  first tidbit of news courtesy of The Terror Drome.  Bravo Wave 2 vehicles in 2010 will include a new HISS Tank!  Check out the image below! 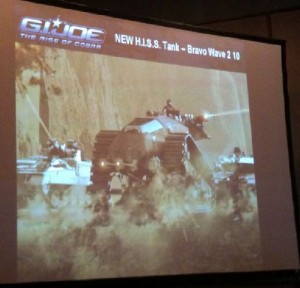 Never fails…whenever Fred from JBL shows up at the G.I. Joe Convention, you can be assured that some awesome pictures will be coming forward.  On the JBL Convention Coverage page, Fred has posted a short series of images of the Convention Exclusives, and the pics are pretty much the highest quality I’ve seen yet.

He’ll be hitting the display floor today at 2:00pm as well, so expect big things!  Check out the images mirrored below.

spiderpumpkin from HissTank has come through again with some pictures and details of the convention exclusive items that are being purchased as I type.  This appears to be the lowdown (and what an expensive lowdown it is!):

Actually, in all honesty, the prices aren’t terrible…well, except that 12″ Crimson Guard.  Yikes.  I can appreciate the production costs and the limited run, but that’s far and away the most expensive parachute figure ever.  It’s a beautiful figure, but you’re definitely paying for it.  The other items are about standard for Convention stuff…

spiderpumpkin also posts some great pics of the filecards and stuff at his photo gallery, which I have mirrored below.