Adding insult to injury – the origins of the G.I. Joe: Retaliation Swamp-Viper

As usual, notpicard has got a great eye for parts, unused or otherwise.  I posted images of the Fang Boat w/ Swamp-Viper last night, and today, notpicard left a comment referencing some old unused “Clutch” tooling.

It was a story that I posted some time ago, pointing back to the Facebook page of Matt Brouillard, who is apparently a freelance sculptor who did some work for Hasbro, including an incredibly awesome looking “Clutch” (a name Mr. Brouillard used).  This Clutch looked pretty futuristic, yet had a ton of amazing detail throughout…and guess what?

Yeah, that’s Swamp-Viper.  Only the figure looks considerably different once it’s tooled up with reduced detail and articulation.  There’s absolutely no doubt that the Clutch sculpt was the foundation of this figure, yet it’s downright depressing to see how much detail and design is lost through the articulation changes.  Ugh.  It’s not just missing joints, the entire figure just doesn’t look as sharp or as cool.  Check out the comparison image below: 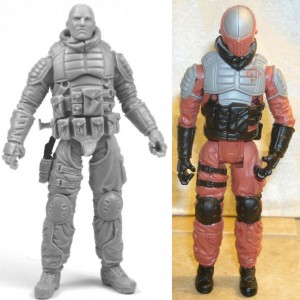 Obviously the armor design and overall uniform design is the same, though there are some missing pouches around the waist, and with the t-crotch added, you loose the detail in the upper legs as well.  Some of the sculpting work on the gloves is not the same either, and overall, things just look a bit softer and less crisp.  It still looks like a very impressive design, but by reducing the articulation, the figure itself suffers in almost every way.

A real shame.  Again, big thanks and kudos to notpicard for picking up on this instantly.  He’s got a great eye.