This has been kicking around in my head for a long time…probably ever since the announcement of the death of the o-ring format.  Certainly many fans hold that treasured construction close to their heart, but I am literally stunned at how fast and furiously the movement has been to the new “modern era” style.  Even five years ago, if the figure wasn’t an “o-ring” it was immediately cast aside as inferior, and now here we are in 2010, and the fandom at large as moved far away from the o-ring format, and has happily embraced something totally different.

With the (albeit remote) possibility out there that G.I. Joe: Retaliation may re-invent the wheel yet again, I really got thinking…over the past 28 years, G.I. Joe: A Real American Hero has undergone a number of format changes and face lifts.  Which were the best or most impactful?

Now for this list, I’m not counting the o-ring.  That was a standard from day one.  I’m specifically talking about enhancements.  A change or progression that moved the toyline along and continued to revolutionize the industry.  So, let’s get to it.

One of the more overlooked articulation points, up until the time when figures started coming with a swivel ankle, they had to balance precariously, usually with one foot tilted up in the air, which obviously isn’t the most realistic look.  Working with the swivel ankle, the up and down joints also help in maintaining a realistic pose and allowing for much more flexibility and poseability, even with such a minor change.

A source of much debate amongst the G.I. Joe fandom, especially when the 25th Anniversary was first rearing it’s head.  Many fans complained about how the joint looked, and even in recent cases (such as Sgt. Slaughter) aesthetic appeal definitely took a hit for the sake of functionality.  However, I do think the mid torso joint at this point is a critical component of the figure’s poseability.  In looking at a real human being and they way they move, they don’t have a waist joint, they twist at the torso, as the figure does, so maintaining that realistic articulation has helped many fans get over the loss of the o-ring.  As the Pursuit of Cobra and 30th Anniversary figures have evolved, Hasbro has only made this joint more effective, seamlessly blending sculpted items on the chest over the joint to help conceal it. Lifeline is an especially good example of this with the row of pouches falling above that joint, which retains articulation but doesn’t sacrifice aesthetics.

The move from removable heads (with neck balls attached) to the neck ball and head socket format is something that truly enhanced the customization ability and interchangability of the G .I. Joe brand.  Sure, heads were removable back then, too, but you needed to remove a back screw to do it, and not all neck balls were compatible with every torso.  Of course, that same issue is still present here, but the fact remains that Hasbro can now easily include swappable heads that only take seconds to switch.  In fact, that’s something they’ve done a lot with the recently released Storm Shadow, Renegades Cobra Commander as well as the Pursuit of Cobra Snake Eyes.  This flexibility provides a lot of enhancement possibilities to released figures, allowing for something like Storm Shadow, which can serve as a Renegades version as well as a true 30th Anniversary “realistic” homage.

As great as the generic “c grips” were for so many years, allowing for holding weapons as well as doing other functions, Hasbro has gotten exceedingly good at designing the pistol grip hands so they can realistically hold weapons with the fingers in the trigger guards.  Sure, this impacts the ability to do other things like punches, etc…  but the grips are designed well enough that they could function in either regard.

It’s been a great evolution, and a huge improvement over a lot of the 25th Anniversary figures, which were saddled with clunky, almost closed hands that prevented a lot of accurate weapon holding. 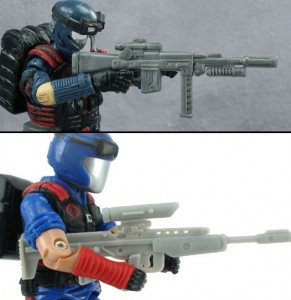 This was one thing that the new sculpt era brought to the table that made a very big difference on the o-ring figures.  Figures like Barrel Roll and Recondo ended up working amazingly well with those swivel wrists while it was a glaring omission on figures like Blackout.  Now pretty much every figure comes with the swivel wrists (and still others come with the multi-jointed wrists) and it adds incredible flexibility to the figures as they stand.

Even more important than the mid-torso joint in my opinion, are the various different sculpted “Secondaries” that go on top of them.  This is probably the single greatest thing that the 25th Anniversary brought to the table with the idea that basic figures could be more or less the same underneath, with different vests, webgear, etc…  applied on top in order to create entirely different figures.

While Hasbro experimented relatively successfully with the 25th Anniversary line, they’ve been able to really push forward in recent years with the Pursuit of Cobra and 30th Anniversary figures.  Taking figures like Snake Eyes and Shock Trooper and adding some key pieces to them have given us some great Cobra Trooper and Cobra Viper updates, not to mention the Steel Brigade and other tweaked figures along the way.  It really has redefined the way Hasbro produces their figures.

While the whole “Diaper Crotch” phenomenon got collectors all riled up with the 25th Anniversary line, but what a lot of collectors might not realize is the first controversy over hip movements happened way back in 1983!  The initial release of the G.I. Joe: A Real American Hero line not only had the straight-armed figures, but also had these wide and clunky “crotch” pieces that didn’t allow for great range of motion of the hips.  When the swivel arms were added to those figures, the “crotch” was also thinned down quite a bit, which helped mobility and also reduced the risk of breakage.  Didn’t eliminate it of course, but it did reduce it.  This was a huge improvement over the first year figure releases.

Before the head became a separate piece that joined the neckball, way back in 1985 figures started getting released with ball-joint necks, allowing them to look up and down as well as left-to-right.  Way back in the mid 80’s this was a revolutionary articulation adjustment, far above what other toylines were doing at the time.  This is just another example of G.I. Joe: A Real American Hero setting action figure design trends in the 80’s.

Along with that improved neck motion, the figures also had a tendency to be sculpted a bit larger and more muscular, which really separated some of those later releases from previous versions.   Even with the larger stature, though, the obvious bonus was the better range of motion of the head, which made for some very cool new poses for your favorite army man.

This was an amazing articulation adjustment and improved figure mobility 100%.  Far and away the most important enhancement to come out of the 25th Anniversary line, the double jointed knees allow for much more realistic crouching, walking, and even better standing balance from the figures themselves.  Over the years, Hasbro has perfected the design, able to combine mobility and sturdiness, giving us a nice solid knee joint that holds the figure upright yet still allows for awesome movement.  This was one heck of a great addition, and I think with double knees and swivel wrists, the o-ring figures could still be a very viable format for figure design. 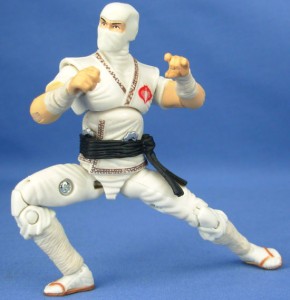 Yes, ladies, gentlemen, and Joe fans, this is definitely the greatest single articulation enhancement in G.I. Joe history.  The infamous “Swivel Arm Battle Grip”!  All of the other above articulation changes would be for naught if your 4″ army men couldn’t swivel their arms to hold their weapons properly.  The addition of a simple twist joint in the bicep of the figure made a remarkable change to the basic way that action figures could move.

Even with no other competition in the action figure market back in 1983, Hasbro still took it upon themselves to improve on an already nice design, and slimmed down the figures, increased the hip motion, and added the swivel arm battle grip, which completely re-invented action figure design in pretty much all formats.  That simple joint addition made huge changes to how well they could hold their weapons, or even just stand at attention, and I would argue that no matter what other articulation changes they make going forward, none will match what this one did.  To me swivel arm battle grip has always been synonymous with Destro, he’s the first figure I remember seeing it on, and it totally changed the landscape of my toy buying youth.  Once I had a swivel arm battle grip figure I simply couldn’t accept anything less.

G.I. Joe: A Real American Hero has always been known for its well articulated and revolutionary design.  Even though enhanced articulation is much more the norm now than it was 30 years ago, G.I. Joe continues to lead the way and re-establish the baseline for action figure design.  The above design and articulation changes are only part of the reason why.