It’s a fairly safe bet these days that if pictures leak out of Asia of some upcoming pre-production items, HissTank member Gyre-Viper will have some more detail in the coming days…and these latest images are no exception.
Gyre-Viper has indeed posted a bevy of new detailed images, over 80 of them to be exact, which I’m mirroring here.
G.I. Joe and Cobra Mech Suits:


These look pretty damn cool.  Of course, the most important question to me is “was the cockpit retooled”.  The old Iron Hammer could fit 3 3/4″ figures, but it was a very tight squeeze, and only worked marginally well.  So, I was hoping there was some new tooling involved with these re-releases.  Well, that certainly appears to be the case. 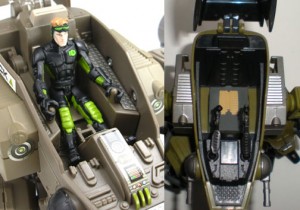 By carving away the interior cockpit and adding more recessed control arms, there’s now plenty of space for 3 3/4″ (or even the larger new style 4″) figures, which is awesome.  If anyone wants even more detailed pics of the original Iron Hammer, my review is up at Sigma 6 Central, and I also mirrored some images from that below.  This thing is the balls.


Jurassic Park AWE Strikers w/ drivers:
Along with the Mech suits, Gyre-Viper has also posted images of what look to be some upcoming Jurassic Park items using G.I. Joe tooling.  The AWE Strikers are cool enough, with the dinosaur like camouflage, but hot damn…those Firefly/Resolute Trooper figures are absolutely INSANE.  Love the camouflage patterns.  Cool thing is, the green camouflage can make for an awesome jungle look, and even the blue and black mixes in with Cobra’s “Night Watch” color scheme nicely.  Both of these figures will make for some great Cobra troopers, and it only helps that they sport the Resolute gear, too.  Really dig them.