Transformers: Revenge of the Fallen kicked off the whole Augmented Reality gimmick on it’s Blu Ray disc, overing kids, fans, and adults with an affinity for large robots the chance to interact directly with the Transformers characters.  All you need is a PC with a webcam, a brand new copy of the Blu-Ray disc, and some time to waste.

Well, as first reported by Paramount, and now covered more in depth by IGN.com, G.I. Joe: The Rise of COBRA (which hits Blu Ray and DVD Tuesday, November 3rd) also features the Augmented Reality gimmick, this time offering up a chance for you to play a cool interactive fighting came featuring Snake Eyes and some of COBRA’s most sinister members.  Check out the article on IGN.com for more information, and be sure to pick up your copy on DVD or  Blu-Ray this Tuesday! 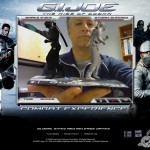