New items being spotted at brick and mortal retail

To go along with recent reports of the Toys “R” Us Exclusive Attack on the Pit multipack, reports are coming in that Target has gotten in on the act, with recent shipments of the “Rescue Mission” 4-Pack hitting retail.  According to a Target employee on HissTank.com, initial release schedules were for October 11th, but apparently some stores are getting an early hit.

While it doesn’t pack as much punch as the Attack on the Pit set does, I’m starting to warm up to the Rescue Mission set as well.  I really love the spandex Duke to go along with the Ripcord from TRU’s set, and that Resolute Snake Eyes is the coolness no matter how he’s used.  I’m actually really looking forward to getting that figure in hand, too, I think he’ll look pretty bad ass in all black with the Paris Pursuit head sculpt.

Two Neo-Vipers round off the boxed set, which are all well and good, too.  While this set clocks in at $19.99 ($5 cheaper than the Attack on the Pit) I don’t think it quite offers as much bang for your buck.  The Toys “R” Us set comes with 5 figures instead of 4, plus the Molepod!  Quite a bonus for five more dollars.  Check out the image below. 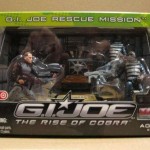 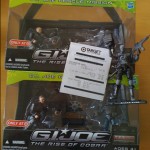 To go along with this, several HissTank members are reporting that the Toys “R” Us Exclusive Bench Press and Snow Serpent have also been spotted at retail stores as well.