Duck over on the JoeBattleLines forums has reported that he received a pair of Dragonhawks from HasbroToyShop, and there are different paint applications on both.  One of them has distinct black trim on various parts of the copter like the stabilizers and engine covers.  Check out his reports here, and I’ve mirrored the images below.

I also have to echo Duck’s thoughts in the thread that the Dragonhawk is actually a really cool little helicopter regardless of its size.  If you can think of it as the evolution of the Locust rather than the next Dragonfly, I think you can appreciate it a lot more.  If folks had the Night Attack Chopper and use that as the primary assault copter with the Dragonhawks acting as smaller, quicker support crafts.  In fact, Count Blacktron did the same thing in an image below. 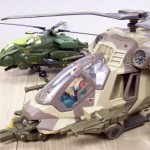 Regardless, the copter is neat, regardless of its size.  The $25.00 is still a hard one to absorb, considering the Locust was a lot less back in the day, but still a neat vehicle for what it is.