News on the 12″ side of things (that isn’t Sideshow related, for once)

A few different interesting 12″ pieces of news today…  first of all, the Terror Drome is reporting about some images of a 12″ Stalker and Gung Ho that are very military in nature and really don’t seem to fit into the whole movie aesthetic.  Are they figures that were slated for release in the normal line before the Rise of COBRA infusion, or are they still to come?  Gung Ho could almost pass for his Resolute/video game version, so that’s something to watch for.

Check out the images below:

Also discovered by The Terror Drome is Entertainment Earth’s pre-order listing for the first wave of Rise of COBRA 12″ figures, including COBRA Commander.  This is the first time ole’ toasty’s been seen in twelve inch form: 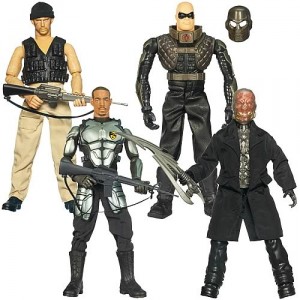