eBay seller “dreamcab” has posted several auctions for test shot vehicles with drivers that may or may not be for upcoming movie items.  I would hypothesize that at least a couple of them were slated for vehicles w/ figures before they got cancelled and re-allocated as figures in the COBRA Island 7-Packs.  I’m not sure I buy the listing descriptions, but we can at least take a look at what are listed: 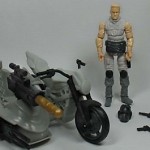 Listing calls this a “RAM” and doesn’t mention the figure’s name, but the vehicle itself is obviously a newly tooled and somewhat modified Silver Mirage.  That being said, it’s still tough to tell what the figure is with the size of the pic in the auction.  The tooling looks like the Resolute Duke that comes with the Resolute 5-Pack, though who knows in what capacity the figure would have been used. 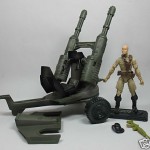 This is definitely a curious one.  The listing calls it a “FLAK w/ Outback” but obviously that’s the Whirlwind, not the FLAK.  And also obviously, taking a close look at the figure, that looks a hell of a lot like Recondo to me.  The tooling, the shoulder holster, the hat and gun.  That’s who it is.  It would seem this is how Recondo was supposed to come before this set may have gotten cancelled and had the figure re-allocated to the 7-Pack. 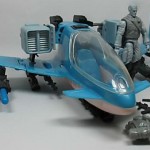 The Firebat itself looks to be modified with larger engine intakes, rockets, and a differently tooled tail section.  The figure looks like Sgt. Airborne, so who knows if it’s just a test shot for that figure, or if it was slated to be something new.  It’s certainly not A.V.A.C. as the auction indicates.  Something for the movie perhaps? 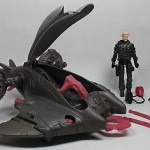 The auction is labelled as “Duke w/ Jet” but I see no indication that this is even Duke, or that this is even an upcoming vehicle.  This is obviously the Valor Vs. Venom Sting Raider, but who knows in what capacity this may end up getting released or what the main goal is.  The figure is tiny, so it’s tough to tell what tooling was used or what weapons it comes with.

EDIT: Thanks to the keen eye on folks on HissTank, as well as DistantFred via the comments, it certainly looks as if the driver included with the above auction is the COBRA Island 7-Pack Lamprey. 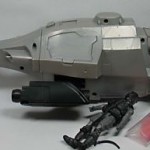 This is obviously the movie COBRA Gunship w/ Firefly, though the auction is listed as being the “Skyhawk”, which is the most glaring example of these auctions being mislabelled.

Thanks to The Terror Drome for pointing these auctions out!