So, how about those movie vehicles…

All right…as sad as it may sound, I’ve been reflecting on the movie vehicles, and on the fandom reaction to them, and figured I should toss in a more elaborate two cents than I did earlier this morning when the news broke.

It seems as if the vehicles are taking a page from the figures, with a mixture of existing and new tooling (though a lot more new than reused in this first run), and like the figures, the results are a little bit mixed. 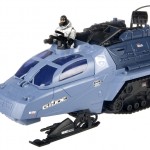 This repaint of the Valor Vs.  Venom Ice Sabre (and the Direct to Consumer one as well) is probably the least exciting, just because it’s a rehash of what we’ve seen before.  As rehashed as it is, though, I really like the Ice Sabre design and this was actually one of my favorite vehicles of the “new sculpt” era.  It’s got a decent arsenal, a cool, sleek shape, and it’s overall a pretty cool medium-sized vehicle.

I am a bit perplexed about the winter vehicles permeating this first run, however, especially if they’re hitting this summer.  I suppose the kids  can play in the grass or sandbox with this thing, but that’s not nearly as fun as freshly fallen snow.

The “Frostbite” figure certainly looks interesting, if somewhat obscured by the cockpit.  He looks to obviously be wearing the Snow Serpent parka, and one would think he’s got that from the neck down.  Instead of a regular open face, he’s got a full facemask, which is neat in a way, because that makes the figure a bit more anonymous, and he could probably serve multiple functions for enterprising fans.

The bluish color is nice, but a little odd, definitely sort of looking more “COBRA” like, and it doesn’t match the Rockslide at all, which is a somewhat odd choice.  Although if the color scheme did match the Rockslide, this would resemble the DTC version a little bit too much, I think.  All in all, I like the Ice Sabre, and the Ice Dagger rendition of it looks cool enough, I guess, but not warranting another purchase.  I’ve got two of these already, I don’t need a third, and while the figure looks interesting, there’s nothing compelling me to plunk down the cash.  This one will be a pass. 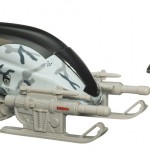 I’m honestly not really sure where I come down on this one.  Unlike the Ice Dagger, this utilizes all new tooling, and has a pretty cool new paint job, but ultimately it’s really a strange-looking little snowmobile.

Perhaps I’ll have to see it in the film before I can fully appreciate it, but as it stands, I can’t really tell where the driver goes, what the functionality is, or how this little craft really works.  I imagine the driver lies on his belly underneath the sloped black canopy and rides this thing like the infamous Recon Sled LCV.  That’s an interesting concept, though I’m a bit curious if Snow Job will even slide in there with the articulation-restricting coat tails he’s got.

Speaking of Snow Job, there isn’t a whole lot new here.  He’s a great figure, as he was when he was first released, and this paint scheme is pretty cool as it’s a nice tribute to his 1997 look, a figure that doesn’t get nearly enough credit, design-wise.  His camouflage uniform also matches the Rockslide here (as well as the JvC Rockslide, too), but it’s still sort of more of the same.

The Rockslide is an interesting, Joe-like looking vehicle, but it does end up looking a bit too much like the chunky, clunky stuff we got from 2002-2004, which is not a good thing.  The Night Raven is evidence that the Joe designers are able to come up with some very cool new designs for these vehicles, so I’m not quite sure why the Rockslide turns up more “rocky” than sleek and quick, but maybe I’ll think a bit more of it once I have it in hand.  Of course, that’s assuming I ever have it in hand, I’m not certain I’m dropping the money at retail for this one either.  We’ll see. 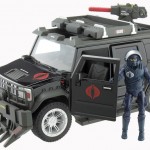 I’m making an assumption here that this vehicle is still called the “Scarab” since it’s referred to in the Wired.com article as simply “hummer”.  I will say right up front that when I first saw pics of this thing in Toy Fare I was quite unimpressed.  It really didn’t do anything special for me, and once again seemed to retain that Playskool feel from the early 2000 era G.I. Joe stuff.  I understand that these vehicles have to have “kid” appeal, but I don’t think “kid” is synonomous with “round and blocky”.

However, I will say, that once I saw this somewhat updated picture (more in scale with the figure, size-wise) I’ve sort of warmed up a bit.  It’s larger than I thought, and will evidently hold the figure just  fine, without him having to squeeze through an opening in the roof.  It’s a very large, thick vehicle that looks like it has some “balls”, which is always good, too.  You don’t see COBRA driving around standard vehicles very often, so it’s neat to see them trucking around in a modified H3 vehicle.  I can kind of get behind this one.

The driver is also a great homage to the vintage Motor-Viper, and I think this is a great indication that Hasbro is thinking of the vintage fans when it comes to the movie toys.  The Motor-Viper is a very osbscure character, and the fact that Hasbro is designing movie figures around that is a great sign.  Perhaps even though the Anniversary toys are taking a “break” during the Movie craze, us old school fans will still get some bones thrown our way.  Let’s just hope the bones don’t stop with Moto-Viper.  Keep ’em coming, Hasbro!

I think this vehicle will actually end up in my collection.  I’ll have to see what the price point is at retail, but I think Hasbro managed to walk the line between “kid” and “collector” and still ended up with a somewhat fun and functional COBRA vehicle.  I can see myself loading this bad boy up with Alley-Vipers. 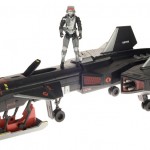 And now for the crown jewel of this first run of vehicles…the Night Raven.  I had my doubts that Hasbro could do this impressive vehicle justice, because the original is just so iconic in design and execution.  It’s a fan favorite, and it’s important to do it justice, and I think Hasbro knocked the ball out of the park.  But, I’m reading comments on a lot of boards that disagree with that notion.

The biggest complaint I see is “it’s too small!”.  Okay, fair enough, it is smaller than the original Raven.  But, honestly…why does it matter?  Besides the fact that the original could hold two figures in the cockpit (and one in the now non-existent drone) what was the benefit of the plane being so huge?  If anything, it makes the Night Raven a bigger hassle to store, a bigger hassle to display, a bigger hassle for kid-sized hands to play with, and there is absolutely ZERO decrease in “play value” or functionality.  The slide-down cockpit is still intact, the awesome sleek design is right there.  The color scheme and overall look is nearly identical (with the exception of a more modernized “swept wing appearance), and in fact, it looks like there are more rocket launchers here, plus the rumored sound effects.  So we have a smaller, more managable plane, yet it retains all of the charm and function of the original.  Where’s the bad side?

Not to mention the fact that let’s face it…the SR-71 was state of the art back in 1986 when the Raven still appeared, but these days it’s far from it.  And as I hypothosized a couple of months ago, I think the Joe design team really took what they learned with the Sigma 6 2.5” toys and managed to almost perfectly marry the two sizes and styles.  We have a jet fighter that strongly resembles the awesome Sigma 6 Firebat (that everyone seems to love, with the exception of its scale) and is much more suited to what COBRA would be using.  Let’s face it, what use would a quick-strike, covert terrorist organization have for a high-altitude espionage aircraft?  I’d think they’d sink their budget into state-of-the-art single manned strike craft myself, which is exactly what this is.  Yet, even with a more modern design and a non-dated look, Hasbro still manages to work in a number of awesome Night Raven homages.  A great looking vehicle, and I for one do not mind at all that it’s small.

The Strato-Viper is a pleasent surprise as well, even if he’s not in his original color scheme.  Seeing this figure gives me some hope that we’ll end up getting some of the rumored items that have not yet come to fruition.  If they don’t make the “cut” for the Anniversary, it appears that there will always be hope in the movie line, too.  That’s good news.

All in all, the movie vehicles are a lot like the movie figures and somewhat of a mixed bag.  But a mixed bag is still a lot better than I thought they would be.  I was considering the next 12 months as a sabattical from Joe collecting, but it looks like I won’t be getting all of that “time off” because there is still a lot of kick ass looking stuff in the wings, regardless of whether or not you think the actual Hollywood production will be worth the film it’s printed on.