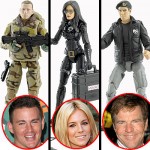 People.com scoops the toy world today with a few pictures of movie figures from the upcoming G.I. Joe: Rise of COBRA film.  Granted, it’s all figures we’ve seen before (Duke, the Baroness, and Hawk) but the pictures are nice and clear, and visible for the first time to folks who haven’t cracked open the latest issue of Toy Fare.

I’m thinking most of us saw these in Toy Fare a couple of weeks ago, though these pics are a bit better and have the full figure shown, rather than just a waist-up look.  Overall, I like ’em.  Yeah, the Baroness still has the manly face, and I’m not sure what the heck is going on with Duke’s pistol (where’s the holster??), but I think they are nice figures, and best of all, not just different shades of black and gray.  I think fans of vintage stuff and new stuff are all in for a few nice surprises during Toy Fair this Saturday, and I’ll be there getting all the pics and info that I can.