As readers of the site no doubt noticed, I’ve become enthralled with the new 1:18 scale Marvel offerings from Hasbro, including the new Wolverine: Origins figures.  The great thing about them is that they take the characters that are appearing in the film, and “Marvelize” them, so they appear in their comic-accurate uniforms, even if they don’t appear that way in the film.  This, we get figures like Deadpool, Sabretooth, and Gambit, who look relatively generic in promotional pictures, but get their comic-accurate uniforms in the single pack figures (or in Sabretooth’s case, an exclusive two-pack).

I haven’t lucked out enough to stumble on any of these as of yet, but long time friend of  GeneralsJoes and JoeBattleLines member “Alexx” comes through with some nice reviews and pictures of three of the figures from Wave 1.  Read on!

Here we have Wolverine in his brown costume with a red sword. This one is my favorite, since this version was my first Wolverine figure (removable mask, retractable claws). I honestly cannot find fault with this figure, except the semi-annoying hips, but like I said, they don’t really get in the way as much as they do on the larger figures. Nonetheless, G.I. Joes have the advantage there as posing is a breeze, where you have to kinda work the leg on Wolverine to get to crouching or standing. Things are awesome up top, though! The chest joint works great, and he can arch backward or hunch forward way better than most of the 6 inch figures so far (for some reason, that type of joint rarely works). The arms, depending on how you twist them around, can get a little bit more than 90 degrees, though, I’m not all that worried about that since he can’t use guns that well with his claws out. So the arms perform perfectly for Wolverine type poses! About those claws, though: No more bent claws! Well, assuming he’s not forced into the package in some strange way (none of them have, that i’ve seen). They went with the solid claw mold (rather than separate claws, thank god), but there is one minor detail that really makes the difference: the plastic between the claws is painted black, so you don’t have one giant silver chunk sprouting from Wolverine’s hands! So, you get good-looking claws without the standard super warping. Overall, I like this one the best for nostalgia, but he also just seems to pose better than the yellow version. So, if you’re only going to get one Wolverine, I’d make it this one. 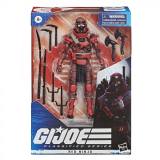 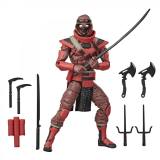 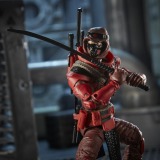 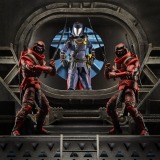 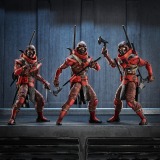 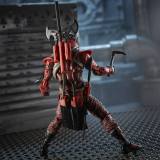 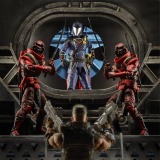 There isn’t much to say about this one that isn’t the same on the brown version (though his sword is different, not just recolored). His articulation is the same and it works pretty much the same (though the arms don’t seem to move as far toward the bicep). One cool thing, though, is that this is mostly a new figure, only carrying over the arms, hands, and (probably) thighs. The torso has the black slashes on the costume molded in and kind of raised up (and there are shoulder pads firmly glued on) so that is new, the head is completely different, and even the lower legs have differently molded boots! I was surprised, since all they had to do was mold one figure and paint it differently (with added shoulder pads). Regardless of the different mold, though, it all works the same and is a good representation of Wolverine in the old yellow and blues. He still feels a tiny bit stiffer than the brown version, but it’s probably just standard variation among figures. 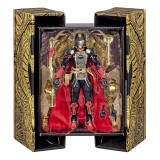 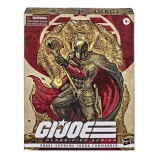 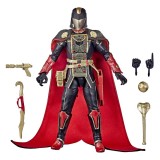 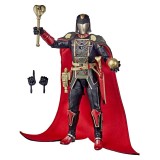 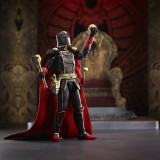 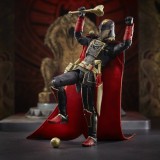 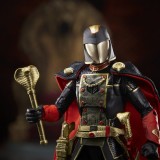 This guy is where the differences among figures come in. I don’t know why marvel figures can’t seem to get an articulation standard down, but it doesn’t always get in the way, so I don’t really find too much fault in it. So Gambit here doesn’t have the same standards as the Wolverines do, as he lacks ankle joints, wrist swivels, and his torso joint barely moves. That’s not to say that this guy isn’t cool, but as a toy, he’s nowhere near as fun. His right hand is angled back and twisted to the side, so he can only hold his staff in particular places, and his other hand is (of course) the card holding hand, so it has his two fingers out and a thumb arched so he can hold the glowing chunk of cards he comes with. Sadly, though, he can really only hold the cards up, so he can hold them out and say “look what I have!” but not actually be able to look like he’s about to throw them. Mostly, his lack of wrist swivels make him stiff and hard to get in a cool pose, and that also detracts from his usefulness all around. I’d say he’s pretty much only for Gambit fans, ’cause I don’t think there’s much to complain about if you’re a big fan of the character. I mean, the look is accurate and cool, and he comes with what he should. He could have been a lot worse. Nonetheless, I still wonder why marvel figures aren’t allowed to have articulation standards like G.I. Joes. 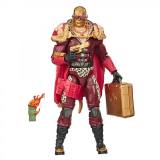 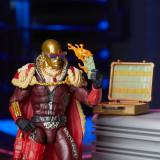 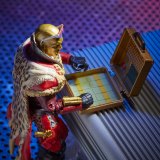 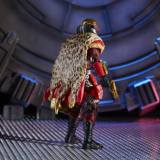 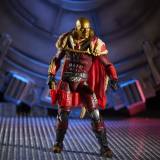 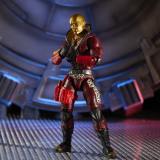 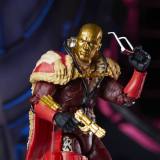 It seems like there have been two factions for these new Joe sized marvel figures: the folks who love Marvel Legends and have many 6 inch figures and are unhappy about the possible replacement (hasn’t been confirmed yet) and the Joe fans who have wanted superhero figures to go with their Joes since…well, heck, since whenever they got into Joes. Honestly, it seems like people don’t take any other factions into consideration, or history, for that matter. I was never even a fan of the 6-inch figures, since all of my previous Toybiz figures were 5 inches! So I’m some other anomaly all together.

Nonetheless, I do put myself with the Joe fans, because the 3 3/4 size has always been my favorite. Since I’ve got such a large amount of that size, I always welcome any size change that brings them down to that level (whereas the size increase just brings problems no matter what). After that little faction problem, though, you have to get down to just how good these figures are. Hopefully some folks agree with me on the fact that a good toy is a good toy. You may not have a use for a particular size, but any toy fan, deep down, simply has to regard a fantastic action figure.

So that brings me to these! It’s one thing to have a figure in the same scale as a Joe figure, but it’s another to have one be in the same scale and on par with how cool Joe figures are. My main reason for loving Joe figures is the mix ‘n match you can perform with pretty much all the accessories, and the articulation (not too much, not too little). So with the release of Toybiz’s Superhero Showdown figures, you can imagine that I would have been excited to get something in the same size and similar articulation…however, I didn’t expect the wobbly limbs and high breakability. Toybiz delivered some good-looking toys, but a majority of my broken toys in my collecting years had come from Toybiz. Hasbro has brought a wave of quality to the marvel line and, thankfully, that has carried over to these smaller figures.

One thing in particular that I’ve noticed between Superhero Showdown and these figures is the fact that SS tried out different articulation than their larger brethren. I’m not sure why, since that was part of why they were so wobbly. The Hasbro offerings, however, are as close to a tiny Marvel Legend as you can get! Sadly, that does carry over the ML hip joints where you have to twist the hip ball to get the legs to go out or forward, but that’s really a small thing (and it seems to only bother me in particular). The main thing here, though, is that these figures are tight, and can hold a pose very well! I can’t imagine that these figures could do poorly when they are made perfectly for posing or for playing.

A  huge thanks to Alexx for taking the time to do some pics and words about these figures.  Thanks very much, Alexx!!