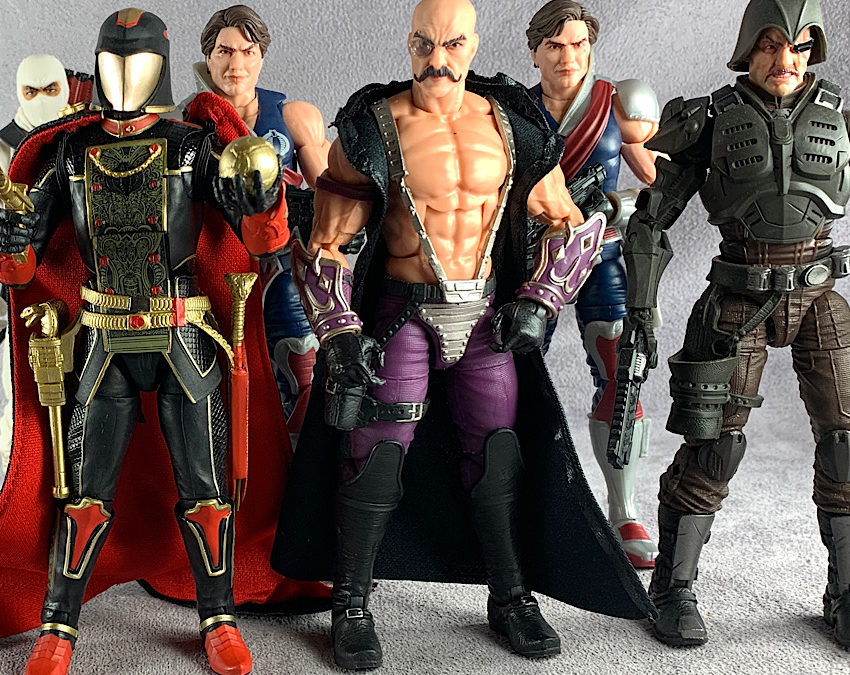 A week of reviews – starting with Dr. Mindbender!

It’s been a great couple of weeks here at the GeneralsJoes HQ with several new G.I. Joe figures either received or on the way. As a result, I’ll be posting reviews every single day this week!

We’re starting off the weeklong event with the SDCC/Hasbro Pulse exclusive Dr. Mindbender. A great, deluxe figure with somewhat limited availability, I was able to get my hands on one early, thanks to the fine folks at Robot Kingdom. I try not to overpay just to get stuff early too often, but every once in a while the bug bites me.

Check out the latest review at the G.I. Joe: Classified Review page or follow the link down below.

Any time I’m confronted by Joe fans who are adamant that G.I. Joe should be a hardcore military group and one hundred percent accurate to realistic military structure, all I have to do is think back to the fact that in 1986, one of COBRA’s premier members of leadership was a deranged dentist who had perfected mind control. Not only that, but he was apparently a workout warrior with a monocle who enjoyed wearing metal suspenders, a codpiece and a long, black cape. Dr. Mindbender is one of those characters that almost defies description, yet has become an indelible part of A Real American Hero mythology.

I’ll say, first off, that Mindbender is one of those characters who I think is more timeless and more effective in some of his future iterations. I mean, don’t get me wrong, the 1986 version with the purple pants and the aforementioned codpiece is pretty iconic, but in my world, I sort of prefer either the Battle Corps cyborg iteration or the lab coat and glasses wearing version made popular in Devils’ Due.

That being said, it’s tough to argue that either of those versions are more memorable to the general public than the 1986 caped wonder made popular in the pages of the Marvel comic and throughout the Sunbow animated series.

Dr. Mindbender is yet another one of those Classified figures that goes whole hog into the vintage version for its inspiration, translating that 1986 classic in nearly every way to the 6″ scale. There are some minor changes, like the subtle hint of technical components in his monocle, and some nicely enhanced accessories, but beyond that, this is basically a scaled up version of the original.

That’s not to say Mindbender is without his issues. Hasbro offered this figure as an expensive deluxe, available only through somewhat limited quantities at SDCC and through Hasbro Pulse, which has provided some frustration for collectors. I think while Hasbro is doing a fantastic job actually executing on the design and production of these figures they still need to iron out some issues with cost and availability, especially for core characters like this.

Again, the mere notion of this figure borders on ludicrous. The bare-chested mind control scientist shouldn’t work as well as he does within the scheme of a modern military vs terrorist organization. That being said, he almost immediately fell in line with the COBRA hierarchy of 1986 and mostly thanks to the Sunbow cartoon and the eventual creation of Serpentor, the COBRA Emperor, Dr. Mindbender locked his position as a core member of the COBRA elite.

As I mentioned before, this figure is more or less a one-for-one upscale update of the 1986 original. From the familiar mustache to the metal suspenders and even those crazy gauntlets with the weird hooks on them, this figure is a modern, 6″ version of that classic. But it’s tough to argue when every element of the design has been nailed as nicely as this.

The sculpting, as with nearly all Classified figures, is immaculate. Great detail, great mixture of underlying tooling and the overlaid secondaries, which add a depth and realism to the figure that is difficult to capture at the smaller scale. The various textures used throughout the suspenders, the belt, and even the pants all make each element feel like different material, as it should in real life.

Purple, silver and black pop, the colors rich translations of the original and mesh together with perfection. He stands out very nicely among the other COBRA characters and shows that there’s no reason for Hasbro to shy away from some more daring, dynamic color pallets.

His scowling face is more or less perfect, the small hints of technical enhancements on his monocle a great, subtle addition without taking away from the vintage look that so many fans seem to crave. His soft goods cape is nice and thick, not cheap, thin material, though I do sort of miss the silver COBRA logo that was found prominently displayed on the original. I’m sure there are reasons why they couldn’t mirror that for this version, though it is an aspect that would have driven this right over the top. The always-present holster that perfectly fits his vintage-accurate pistol, is, of course, expected and appreciated. He also has a terrific mount point near the rear of his belt which can connect the small cannister, which also connects to his various weaponry. A nice touch that wasn’t found on the vintage original.

I haven’t been covering the box art or presentation in reviews recently and mostly that’s because there isn’t really enough to share that sets each box apart from the other, even if they have particularly unique or eye-catching art.

However, I’d be remiss if I didn’t mention the astoundingly cool box art and presentation of the Mindbender packaging. The artwork itself is amazing, to make no mention of the layered box that slips from the slip cover and unfolds to reveal the figure and all of the accessories within. Its just– gorgeous. The back of the box is great as well, chock full of plenty of awesome Easter eggs all pointing to the arrival of Serpentor that has now been revealed. Great stuff.

Mindbender, as with the other Classified figures, benefits from fantastic articulation. The reduced size of the suspenders and the soft goods cape both work together to helpfully enhance the figure’s range of motion, since he isn’t restricted by either stiff add-ons or an exceptionally bulky vest that might prevent some of the better poses you might want Mindbender to achieve.

He moves, poses and displays great!

Of course, being a deluxe figure, the accessory compliment is really where one expects Mindbender to excel, and he really does. Things aren’t necessarily 100% perfect here, but I love that he comes with such a wide array of interesting accessories and gimmicks which go a long way toward showcasing his more esoteric adventures.

There is, of course, his familiar laser wand sort of weapon with a nicely thick and poseable hose that slots into each peg with perfection. It fits either accessory he comes with, then connects to the cannister, which pegs into a hole in the back of his belt. A great touch. He comes with two red-tinged containers, one small and one large, the smaller one holds the removable brain while the larger holds the zombified arm, both of which are also included.

Here’s where I have a small complaint or suggestion – it would have been really cool of the skull had been able to fit on an existing figure’s neck ball. Instead, the bottom of the skull is simply flat with no opportunity to add it to a figure. My real disappointment, however, is the zombie arm. The moment I saw it, I knew it would be great to be able to remove a figure’s forearm and stick the zombie arm in its place– only, at least for the COBRA Officer, that’s impossible because the bottom of the bicep is a male peg, so the zombified arm is incompatible. Obviously I haven’t checked every forearm in the line so perhaps there is a figure that would work, but that hasn’t been my experience so far. It would have been cool to be able to represent a character in a partially zombified state.

Anyway– the removable brain with the skull that splits in two are all nice additions, as is the pistol hypodermic which goes with his more standard pistol, very similar to the ’86 original. There are also four small peg additions that plug into the smaller container as well for some added design aesthetics. Lots of cool accessories, I just wish some more thought had been taken to making a few of them integrate better with existing figures.

Though he’s a pretty faithful representation of the ’86 original, which isn’t necessarily my preferred approach, the execution of the figure is impeccable. Making him a deluxe, Pulse/SDCC exclusive, however is something that has rubbed a few collectors the wrong way, making a core COBRA character a bit more unnecessarily difficult (and expensive) to obtain.

Hasbro continues to try and balance availability and price with sell through and I suspect this will continue to be a challenge in the years to come.

From a purely execution standpoint, however, Mindbender is a fantastic figure with some great accessories and will be a spectacular addition to your COBRA hierarchy.

All in all, Dr. Mindbender is a great addition to the G.I. Joe: Classified line. An enjoyable figure with an array of neat accessories and a crucial member of the COBRA organization. If anything that actually hurts the figure in a way because the increased cost and restricted availability seems like a tough pill to swallow for such an important character.

It would certainly seem as if 2015 kind of got away from me when it comes to my G.I. Joe reviews… I managed to stay on top of the 50th Anniversary releases fairly well, but several of the G.I. Joe Collectors Club releases lagged a bit behind.

Interesting that now that I’m tackling them, we’re dealing with the distinct possibility that the G.I. Joe Collectors Club as we know it (as well as the G.I. Joe Convention) may be coming to an end after 2016.  A real shame to be losing them as a resource as I dive into several of their really fun exclusives from 2015.  I truly hope Hasbro has some kind of plans post GIJCC to bring the G.I. Joe brand to collectors, as I believe we’ve been the driving force in keeping the brand alive over the past several years.  That will be considerably more difficult with an annual convention gathering or a Collectors Club offering exclusive toys geared towards us.

I will be cautiously optimistic that Hasbro recognizes our value and isn’t going to just leave the collectors who have been supporting the brand for over 50 years high and dry, but I suppose time will tell.

On that note, you can check out my review of the Arctic Dr. Mindbender at the link below, or on the G.I. Joe Collectors Club Review Page.  Hopefully we still have many years of exclusives like this to look forward to.

It’s becoming almost a daily occurrence, and ACToys.com comes through again.  This time around, we’ve got some very cool pictures of the upcoming Dr. Mindbender and Strato-Viper, errr…  “Air-Viper”, both from the Defense of COBRA Island 7-Pack.  The more pictures I see of these items, the more fired up I get…these are some damn cool looking figures.  Considering there is a lot of existing tooling being used, I can’t help but really smile at the mileage Hasbro’s getting out of it, and at the same time, be a bit melancholy that we’re not still going full steam ahead with non-movie product.

Don’t get me wrong, though, the movie stuff is looking pretty freaking sweet as well, but there’s something to be said for a bare-chested ex-dentist who now specializes in mind control.  And fans are bitching about the MOVIE’S wayout concepts?  Yeeeeeah….  anyway, images are mirrored below.