Darklon and Salvo reviews are now posted.  You can also check the reviews directly below:

As someone who is both a fan of the Iron Grenadiers and a fan of taking established characters and putting new spins on them, I really loved the Convention version of Darklon we received in 2014.  Not only was it an update of a really cool established Iron Grenadier character, but it added some Pursuit of COBRA Firefly aesthetic and gave us a really awesome update to Destro’s criminal cousin.

However, as a Convention exclusive, and a highly desirable one at that, the price soon skyrocketed and fans grew upset that such an important character (is Darklon really an “important character”??) was so expensive on the secondary market.

Well, since the Club now had the tooling for Darklon’s helmet, they figured they’d make a more vintage accurate version and toss it into the FSS.  I’m of two minds on the idea.  Personally I’m not wild about being saddled with a $30 figure that is only subtly different than one I already paid $35 for at a Convention.  Especially when the FSS version uses older parts that are less well articulated, softer sculpted and frankly, not quite as interesting.

That being said, I know the figure will appeal to the broader fanbase, who I do not always see eye-to-eye with.

This figure has the previously mentioned Darklon head sculpt that we originally got at the convention in 2014, and it still works well enough.  Darklon’s torso is from Pursuit of COBRA Snake Eyes in an attempt to give him the textured look of the vintage figure, but his arms are from the 25th Anniversary Zartan.  The result is a drastic reduction in sculpted detail, somewhat annoying articulation in the elbows, and the elimination of the texture on the arms.  It doesn’t really work as a combination with the torso.

Also rather than even attempt to mimic the look of the original legs, the Club just used the 25th Anniversary Iron Grenadier Destro legs which does a nice job tying this figure in with Destro, but doesn’t do such a nice job making him look like his vintage counterpart.  I do like the sword sheath and the color combination is vintage accurate, but the sculpting isn’t accurate, and the knee articulation is only single jointed which is a shame.

Speaking of the colors, the Club does do a decent job matching up the shade of green and purple with the vintage edition of Darklon and the overall inspiration is pretty clear cut.

Darklon comes with a decent assortment of accessories including a MARS briefcase with removable pistol, a pistol for his leg holster, the removable sword, and a retooled version of his vintage weapon.  As much as I love the strangeness of his primary weapon, any time the Club invests money in retooling a vintage accessory that can be found on the secondary market for pennies on the dollar I question the reasoning.  As we get fewer and fewer new heads or other body parts throughout the FSS, I’d much rather see money invested in more of those items rather than retooling vintage accessories in nearly the exact same way as they’re already available.

Darklon is okay.  I prefer the convention version all told, and by leaning on 25th Anniversary parts, the Club aren’t doing themselves any favors.  Limited articulation and sculpting make a big difference between figures that look like they belong with other 2017 figures, or figures that already look a decade out of place fresh out of the package.

Darklon is a favorite character of mine, however this rendition doesn’t blow me away. I love the Convention version with its modern parts and new interpretation, and this one tries so hard to be vintage that the overall aesthetic suffers a bit because of it in my opinion.

Continuing on with their Figure Subscription Service 5.0 reveals, the G.I. Joe Collectors Club has shown their first Photoshop mock up of Darklon tonight.  A somewhat more faithful vintage homage than the G.I. Joe Convention version from a few years back, I’m a bit iffy on the Photoshop work here, but generally the end product ends up looking better.

I do like that they’ve gotten the trademark weapon back in circulation, though.  Very cool.

Check it out at GIJoeClub.com or embedded below.

Various sources are reporting that the G.I. Joe Collectors Club is starting to ship the Iron Grenadier 2-Packs that were not present at JoeCon in New Orleans.

If you ordered on at the Convention, start watching your mailbox!  To see what my thoughts are on them, check out the review below: 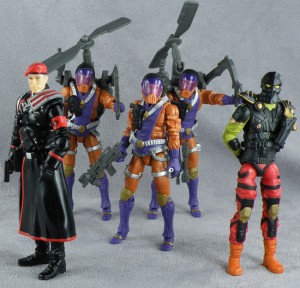 Further proof that Darklon is one of the G.I. Joe Con attendee exclusives

A small error in the production of JoeCustoms member bithomas’ figure set has revealed that Darklon is most assuredly one of the as-yet-to-be-revealed G.I. Joe Convention exclusive figures, most likely part of the IG Ground Assault 2-Pack.

JoeCustoms member bithomas accidentally received the filecard for Darklon in his 15 figure boxed set.  If these filecards were produced, then that can only prove that Darklon is certainly involved somewhere.  Check out the mirrored image below, again from JoeCustoms.com: