I could spend hours extolling the virtues of Duke as a character, but let’s face it, after over 50 different versions of the character, almost everything that could possibly be said about Duke has been said.  While there isn’t a whole lot of new ground to cover when it comes to Duke the character, it’s interesting to look at this particular Duke action figure.

After the original 50th Anniversary run, there were rumblings among the fandom asking why we couldn’t get an updated version of Duke similar to Flint that we got in 2014.  It was something that many folks asked for, in spite of the numerous versions of the character we’d already seen, because interestingly, Hasbro has never really done a modern update (past the questionable 25th Anniversary versions) that tied directly back to the vintage look. 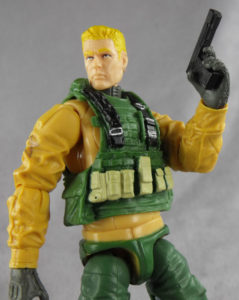 Well, in 2016 Hasbro does a little bit of both, but I’m not certain the figure is better off for it.

While they certainly mirror the vintage look of the figure from a color perspective, Hasbro elects to modernize the figure with a bulkier, almost arctic looking uniform (using components from the Data Viper).  The range of motion and articulation is really great, though the choice of different parts than, say the 2014 Flint does raise some eyebrows.  Duke’s legs are from the G.I. Joe: Retaliation G.I. Joe Trooper, though thankfully seems to have deeper foot holes that fit in the pegs better than some other figures that have shared these parts.

From a color scheme perspective, Duke obviously pulls homage from the 1983 version, but is cast in a strangely bright hue, his shirt looking much more vibrant (and thus a little less realistic) and his pants a deeper, richer green. 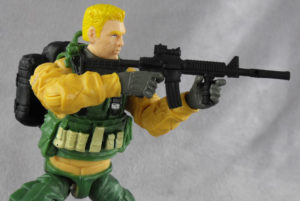 All in all, Duke definitely has the look of the character, though the colors don’t quite jive with a more realistic looking version of the figure.  The sculpting and articulation are both really good, thanks to more modern figure components, but they look like a more arctic version of the figure.  Also, for whatever its worth, once you take off Duke’s vest, his torso is from Rise of COBRA Breaker and looks really skinny next to the baggy cloth of the arms.

Duke comes with a wide array of cool weapons, though none of them especially stand point.  He’s got a familiar machine gun and pistol, the green Shock Trooper tactical vest, smaller M249 heavy machine gun.  He also has a green backpack.  Pretty traditional looking weapons assortment that works fine, though isn’t especially remarkable.

Duke is one of the timeless characters of G.I. Joe: A Real American Hero lore. Rather than go full bore vintage, Hasbro uses some vintage homages with some new twists, which generally I’m a fan of, though in this case it doesn’t work especially well.  It’s a decent looking figure, but doesn’t bring a whole lot of new elements to the table, which feels necessary for yet another version of this character.  Either go full vintage or go full on new, this walking the line in between isn’t especially effective.

Duke pulls some from his vintage version, with some new twists, but those new twists aren’t especially satisfying. A strange mix between the classic character and some modern arctic representation, Duke doesn’t really knock me out in either category. It’s a fine figure, but not fantastic.