IWD Publishing has released their solicitation list for March, 2013, and of course we’ve got the G.I. Joe titles listed here.  G.I. Joe: Special Missions kicks off in March, with the Cobra Files coming in April.

I’m loving the cover of the G.I. Joe: A Real American Hero book, too… Torpedo FTW.

Check out the full solicitation list after the jump.

HOMEFRONT! The G.I. Joe team battles Cobra to the death on American soil! COVERL GIRL, DOC, and the newest member, HASHTAG (yes, HASHTAG) have been separated from the rest and have to fight their way through hundreds of kill-crazy COBRA sympathizers—with a teammate’s life hanging in the balance! Plus: The BARONESS has DUKE in her clutches. So why isn’t DESTRO happy about that?

A NEW BEGINNING! The legendary team of Chuck Dixon and Paul Gulacy lead the G.I. Joe team undercover and into action! The BARONESS tries to get back into COBRA’s good graces—and it’s up to SCARLETT to assemble a team to take the villainess down! 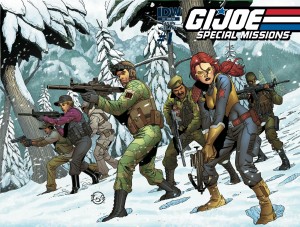 For subscription customers only… enlist up at your local comic shop! A variant Baroness cover by Brandon Peterson! Only for loyal subscription box customers!

The threat in Benzheen has been averted! G.I. JOE has made it out of their most dangerous mission yet. But it’s out of the fire and into the frying pan for America’s elite unit, as Jinx returns from her secret mission with some shocking information. G.I. JOE has to act fast or face the consequences in A Real American Hero #188!

G.I. JOE’s mission at a Comic Convention comes to a close, only to reveal a new, intriguing enemy that may share a history with the Arashikage clan. Meanwhile, Darklon remains a prisoner of the Joes… until an attempt to transfer him from the Pit goes horribly awry! Plus, Zartan and COBRA COMMANDER formulate a plan that would move COBRA HQ to another coast.

SNAKE EYES should have stayed dead! G.I. JOE has mobilized to hunt down their most dangerous quarry ever: one of their own. Has the silent commando gone over to the other side? Is he playing his own game? Only SNAKE EYES knows the answer.

• Collects all six issues from the G.I. JOE and Snake Eyes and Storm Shadow series.