Okay, I already spewed up a very quick post about this, but as over-analytical as a I tend to be, I had to come back and do something more official and fleshed out.  JoeCon is serious business, after all!

The email came through just a couple of hours ago, announcing that the 2013 International G.I. Joe Collectors Convention will be held in Indianapolis, IN from April 4th – April 7th.  My immediate reaction is crushing disappointment, as this exact time frame is usually when I’m stuck in Kansas City at a conference for work, but I’m gonna see if I can grease some wheels this year to get out of that.  We’ll have to see.

My second reaction was directed at fellow What’s on Joe Mind co-host Gary Godsoe who has been very vocal in his desire to not have a convention in Indianapolis (because that’s where he lives…so you know, pretty much the opposite of any normal human reaction).  I only have one thing to say to this:

In all seriousness, this announcement is good news, even though it’s not quite in time for a grand G.I. Joe: Retaliation premier, it’s close enough to the film launch to hopefully draw in some excited fans, and perhaps even encourage some of the Hollywood type to make an appearance.

Along with announcing the date and time, the Collectors Club also posted the following banner image and announced the theme for the 3 3/4″ set as “Nocturnal Fire”. 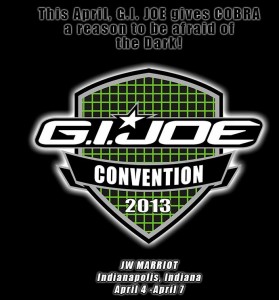 So at this point I’m not sure there’s a fan out there that doesn’t think Night Force plays into this somehow.  “Nocturnal” means “Night” and G.I. Joe is giving Cobra a reason to “be afraid of the dark”.  Heck, just look at the green grid lines and tell me that’s not amazingly representative of the Toys “R” Us Exclusive Night Force 6-Pack from Valor Vs. Venom.  The Collectors’ Club even confirmed at the Convention last year that they were including Night Force Falcon in Wave 2 of the Figure Subscription Service.  We all know how they love to tie everything together.  The real question at this point is what unique twist will they put on it, and what Cobra elements are involved?

Hot damn, I friggen LOVE Convention speculation season.  Good stuff.  The full text of the e-mail is posted below, and keep watching GIJoeCon.com!  Gotta wonder how long it will be before the brochure is posted and before we start seeing toys!  Hell yeah!

Fort Worth, TX – December 4th, 2012 – Fun Publications, Inc., licensee for Hasbro’s official G.I.Joe Collectors’ Convention, G.I.JoeCon, announced today that next year’s convention will take place at the JW Marriott from April 4th thru April 7th in the great city of Indianapolis. You can make your hotel reservations now at GIJoeCon.com.

In the coming weeks, Pop Culture enthusiasts from around the world will be able to register for G.I.JoeCon 2013 through the GIJoeCon.com online registration system. Fans and Collectors’ who register for G.I.JoeCon as a General OR American Hero package holder will receive either the 12-inch Secret Mission to Dragon Island or 3 3/4-inch Nocturnal Fire convention set, admission to the Friday private sales room experience, priority seating at all panels and seminars throughout the weekend and admittance to the Saturday Night Casino Night Dinner event.  Finally, General and American Hero package attendees will also receive a special bonus to go along with their convention box set. General Admission for non-registered guests will be available on Saturday and Sunday only.

For more information on G.I.JoeCon and all activities and the exclusive figure offerings, please visit GIJoeCon.com.
About Hasbro
Hasbro, Inc. (NASDAQ: HAS) is a branded play company providing children and families around the world with a wide-range of immersive entertainment offerings based on the Company’s world class brand portfolio.  From toys and games, to television programming, motion pictures, video games and a comprehensive licensing program, Hasbro strives to delight its customers through the strategic leveraging of well-known and beloved brands such as TRANSFORMERS, LITTLEST PET SHOP, NERF, PLAYSKOOL, MY LITTLE PONY, G.I. JOE, MAGIC: THE GATHERING and MONOPOLY.  The Hub, Hasbro’s multi-platform joint venture with Discovery Communications (NASDAQ: DISCA, DISCB, DISCK) launched on October 10, 2010. The online home of The Hub is www.hubworld.com. The Hub logo and name are trademarks of Hub Television Networks, LLC. All rights reserved.