I know this has been out there on other sites already, but my travel back from Las Vegas interrupted my site focus a bit, but I’m posting the full press release below.  I think most of us figured out how the Kre-O initial release was going to work based on the image names and the information gleaned from the NYCC presentation.

It looks like much of the components here are reused elements from the Battleship Kre-O line, but I think most would agree that the main draw here is with the vintage themed Kreons, I would certainly agree with that.  Hate to say it, but those little guys are really growing on me.

Anyway, check out the full Press Release after the jump, and learn the names of the sets, release details (Blind bags!) and when to expect these at your local Toys “R” Us.  I’ve also inserted the required images to give a better lowdown of what set comes with what items.

Construction Toys Based on the Classic G.I. JOE VS. COBRA Saga to be Available Exclusively at Toys”R”Us in 2013

With G.I. JOE toys recently topping The Children’s Museum of Indianapolis’ list of “100 Toys That Define Our Childhood” at #1, the upcoming G.I. JOE: Retaliation movie from Paramount Pictures scheduled to hit theaters on March 29th, 2013 in 3D and an ongoing comic book series from IDW Publishing, the G.I. JOE brand from Hasbro continues to captivate generations of fans around the world. The addition of KRE-O G.I. JOE sets to the brand’s portfolio will offer the opportunity to build environments and vehicles to play out the G.I. JOE vs. COBRA fantasy and will feature KREON figures based on popular characters from both the heroic G.I. JOE team like DUKE and SNAKE EYES as well as the villainous COBRA organization like FIREFLY and STORM SHADOW.

“We’re thrilled to bring the G.I. JOE property to life in this new format and to expand the KRE-O line with the team at Toys“R”Us,” said Kimberly Boyd, Senior Marketing Director for the KRE-O brand at Hasbro, Inc. “With the introduction of KRE-O G.I. JOE building sets, Hasbro continues to offer tremendous value to construction consumers with high-quality building experiences featuring popular characters from properties unavailable anywhere else in the category.”

“The G.I. JOE brand and its deep roster of iconic characters are legendary in the toy industry and the KRE-O G.I. JOE line will be an exciting addition to the construction aisle at all of our retail locations,” said Lisa Harnisch, Senior Vice President, General Merchandising Manager, Toys“R”Us, U.S. “Hasbro has done a tremendous job of translating the epic saga of G.I. JOE vs. COBRA and favorite characters like SNAKE EYES and COBRA COMMANDER into a compelling line of construction toys, and we’re eager to bring KRE-O G.I. JOE building sets exclusively to Toys“R”Us customers early next year.”

At launch in February of 2013, the KRE-O G.I. JOE line available exclusively at Toys ‘R’ Us and www.Toysrus.com will feature the following building sets, ranging from $2.99 to $39.99:

Help defend the G.I. JOE base at Checkpoint Alpha from the villainous forces of COBRA! Build the checkpoint tower with push-fire missile as well as FIREFLY’S motorcycle in this 82-brick set, which comes with a FIREFLY KREON character, LAW & ORDER KREON character and a KREON dog.

When COBRA attacks with its new SERPENT ARMOR MECH SUIT, it’s up to the G.I. JOE team to ride into battle in the VAMP 4X4! Build both mighty vehicles with this 175-piece building set, including an opening cockpit and opening and closing claw on the SERPENT ARMOR, and rotating wheels and opening doors on the VAMP. Also comes with two KREON figures — DOUBLE CLUTCH and COBRA MECH SUIT TROOPER. 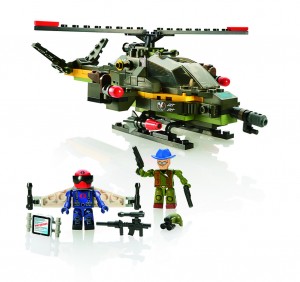 COBRA has stolen the plans to the G.I. JOE team’s base and they’re flying away with them in the COBRA CLAW GLIDER. The only thing that can save the G.I. JOE team is the iconic G.I. JOE DRAGONFLY helicopter! The 152- piece building set builds a helicopter with opening hatch, push-fire projectiles and a propeller that spins with the push of a button! Also comes with two KREON figures — a COBRA TROOPER and WILD BILL.

The battle between G.I. JOE and COBRA takes to the open water as the G.I. JOE THUNDERWAVE JET BOAT goes up against the new COBRA STING RAIDER. The THUNDERWAVE JET boat features a command center for interior play, spring-loaded firing weapon and a small land vehicle that can roll off the ship and down the opening ramp in the back. The 218- piece building set also includes three KREON figures— two G.I. JOE characters (LT. CUTTER and SGT. STALKER) and one COBRA character. Set is not intended for use in water.

Yo, JOE! Build the G.I. JOE team’s battle platform base as it comes under attack from COBRA TROOPERS looking to spring COBRA COMMANDER out of jail! The 372- piece building set allows you to build the base and two COBRA vehicles, the TROUBLE BUBBLE and FANG, as well as a G.I. JOE RAM CYCLE. The base includes a command center for interior play, rotating flick-fire missiles and an opening jail cell. Also includes five KREON figures — CONRAD “DUKE” HAUSER, ROADBLOCK, COBRA COMMANDER and two COBRA TROOPERS, each with unique weapons and accessories!

About the KRE-O Brand

The KRE-O brand from Hasbro successfully launched in 2011 and features high quality construction bricks that are compatible with major brands as well as KREON figures in each of its sets based on popular properties like TRANSFORMERS and BATTLESHIP. Hasbro recently announced a line of KRE-O STAR TREK building sets, under license from CBS Consumer Products, that will launch in 2013 based on the upcoming STAR TREK sequel from Paramount Pictures and directed by J.J. Abrams. Learn more about the KRE-O brand at www.KRE-O.com and watch stop motion videos, building tutorials and more at www.Youtube.com/KREO.

Hasbro, Inc. (NASDAQ: HAS) is a branded play company providing children and families around the world with a wide-range of immersive entertainment offerings based on the Company’s world class brand portfolio. From toys and games, to television programming, motion pictures, digital gaming and a comprehensive licensing program, Hasbro strives to delight its global customers with innovative, well-known and beloved brands such as TRANSFORMERS, LITTLEST PET SHOP, NERF, PLAYSKOOL, MY LITTLE PONY, G.I. JOE, MAGIC: THE GATHERING and MONOPOLY. The Company’s Hasbro Studios develops and produces television programming for markets around the world. The Hub TV Network is part of a multi-platform joint venture between Hasbro and Discovery Communications (NASDAQ: DISCA, DISCB, DISCK), in the U.S. Through the company’s deep commitment to corporate social responsibility, including philanthropy, Hasbro is helping to build a safe and sustainable world for future generations and to positively impact the lives of millions of children and families every year. It has been recognized for its efforts by being named one of the “World’s Most Ethical Companies” and is ranked as one of Corporate Responsibility Magazine’s “100 Best Corporate Citizens.”Learn more at www.hasbro.com. © 2012 Hasbro, Inc. All Rights Reserved.