So, I figured covering each release individually got me up to speed on talking about the 3 3/4″ convention set, but Twitter buds kenny and Twitziller brought it to my attention that I did post about the 12″ set in general, once the club revealed the full image, so it really made a lot of sense to look at the 3 3/4″ set as one cohesive set and see how my perspective might have changed.

The Collectors’ Club did reveal the full image of the set, and that image can be seen at GIJoeCon.com and also mirrored below, and it gives me an opportunity to talk about this set as a whole, instead of piecemeal. 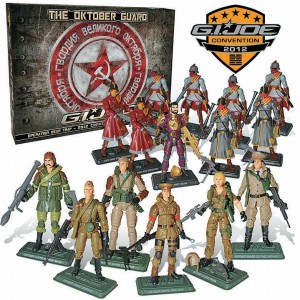 Now, pretty much all of my responses have been positive throughout all the single figure reveals, so I can’t help but maintain that positive opinion when looking at the set in its entirety.  The portion of the set that really strikes me, though, is the Iron Grenadier side of the house.  Seeing the individual figure reveals kind of put a tight focus on the figures as stand outs themselves, and you don’t realize how cohesively they do all fit together.  Even with Voltar’s somewhat purple coloring on his armor, it ties in pretty nicely to some of the red components on the Iron Grenadier Troopers themselves.  While I’m still not 100% sold on the Iron Grenadier Troopers, I do love the Heavy Weapons guys and the Elites, and I think the red is the great unifying color that ties them all together nicely.  Various shades of gray are prevalent throughout, which only further ties the figures together.

For the Oktober Guard, I know there was some concern about Horror Show and his green uniform standing out among his teammates, but I don’t see that issue at all.  Beyond Horror Show, every member of the Oktober Guard here meshes together almost to perfection.  Iron Bear, Daina, and Schrage all work flawlessly, while Brekhov and Stormavik balance with each other as well.  Even the brown figures have those hints of dark green to match the webgear of the other two, and Horror Show’s jacket.  A definite unifying theme that works really well.

As a whole, I think this set is terrific.  I have voiced my concerns with the Iron Grenadier Troopers, and I maintain those…it’s probably the canceled Iron Grenadier Troopers that keep this set from being pretty much one of the best Convention Sets ever.  But that award still goes to the 2005 MARS Attacks set, and I doubt that will ever be surpassed.

That being said, this figure set is still extremely strong, very well done, and remarkably impressive for the operation that the Club is.  A ton of new tooling, a great array of unreleased characters and fan wishes, and unlike many folks out there, I welcome the infusion of “new blood” like Iron Bear.  Great stuff, and I’m on the edge of my seat waiting for New Orleans to come and more Con goodies to be revealed!