Okay, I realize it’s most likely because I’ve been in the process of packing and moving and being sheltered in my in-laws, but why am I not seeing or hearing more discussion about this?  Along with the Oktober Guard vs. Iron Grenadiers set from the 2012 G.I. Joe Convention, the collectors’ club also revealed their 12″ Adventure Team set in totality…

It certainly looks like the folks from the GIJCC are starting to make that final leap to tie in the Real American Hero continuity with the 12″ and Adventure Team continuity.  And I LOVES it.  Well, I would love it if I had the extra greenbacks to spend on it, but as it stands, I’ll simply love it from afar.

Many folks will remember that back in 2010, the Collectors’ Club added a 12″ Henchman to their convention set, which caused a mighty stir among both the Real American Hero and the 12″ crowd.  This Henchman was obviously an operative from MARS and represented the first “bad guy” to really be showcased in the old school 12″ scale.  Last year, the story was built upon a little bit more, and this year, the Collectors’ Club seems to be jumping in feet first, continuing their Adventure Team story, and once again showing off a MARS bad guy, with a distinctly familiar look to him! 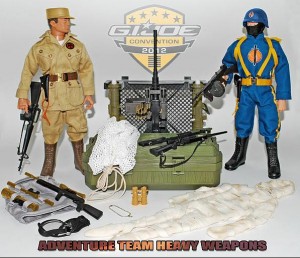 Tell me that’s not Cobra.  Tell me the Collectors’ Club isn’t starting to connect even more dots between MARS and Cobra, and isn’t merging the 12″ universe with the Real American Hero one even further.  That is truly awesome stuff right there.

Another very cool aspect of the set is the whole mummy bandage “bio wrap” concept.  One of the great storylines from the old Adventure Team figure line involved a Mummy, and by making this interesting “Bio-Wrap” suit, the Collectors’ Club is paying great tribute to the old Mummy concept, yet still maintaining a somewhat realistic twist to it.  You can actually dress the MARS Trooper there in the Bio Wrap suit to simulate a mummy.

This set is pretty awesome.  So, obviously, as a Real American Hero fan, you can’t just check out the 3 3/4″ Convention Set on GIJoeCon.com, now you have to check out the 12″ set as well, as they ramp it up year after year, and now with Con Sets from 2010, 2011, and 2012, and with the Incentive Man of Evil figure, the Collectors’ Club has started establishing a terrific continuity that the 12″ universe hasn’t necessarily had.  I think it’s great.