Talk about jumping the gun a bit…

With most reports saying that G.I. Joe: Retaliation figures aren’t hitting until May, it seems very strange that shelf tags might already start appearing for the initial wave of toys, but David Willis of Shortpacked apparently has seen them at his local Meijer store in Ohio.

You can see his Foursquare Check In, and I’ve also mirrored the image below. 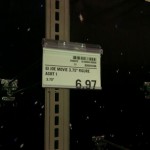 What does it mean?  A whole lot of nothing, but I’m giddy for G.I. Joe: Retaliation news, so I’m talking about it anyway.  Toy Fair in 2 weeks!

EDIT – As Jay from Toy News International has said, it’s even more likely just left over shelf tags from the first film, especially with a $6.97 price tag.  But hey, shameless news grab!  Go me.