I know the design for the Black Dragon helicopter is based on the concept for the V-22 Osprey, which was a dual-propellor aircraft being conceived for the American military that never really evolved to the point that the government anticipated.  But I was under the impression that while it was inspired by the Osprey, it wasn’t necessarily a direct representation of it.

Well, I was cruising Super Hero Hype looking at the new Avengers action figures, which are totally going to help contribute to my bankruptcy in 2012, and I saw this image for the upcoming Resident Evil: Retribution: 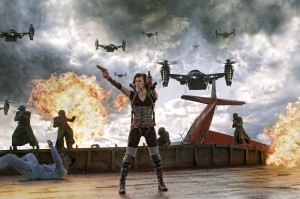 Now is it just me, or are those pretty much clones of the Black Dragon helicopters?  Those slanted vents on the wings (which don’t seem to be present on the Osprey) and the sleek, aerodynamic designs…not to mention the bombs coming from the under-wing containers, just like the Cobra aircraft.

Probably a coincidence, but a pretty damn cool one, I think.  I always love seeing these cross-platform connections.  Check out more about Resident Evil: Retribution over on Super Hero Hype.