Granted it’s a very small image, but over on the GIJoeCon website, a new splashpage has been posted.  And within that splash page, a very small image is in the lower left hand corner, featuring the very familiar Python Patrol Cobra Trooper! 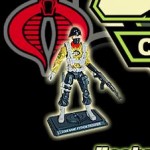 If that small peek isn’t enough, apparently a full reveal of the first Convention figure will appear in the January issue of the Collectors’ Club newsletter.  I haven’t seen this mentioned anywhere outside of the G.I. Joe Collectors’ Club forums.  A short while ago, in a thread dedicated to the 2011 exclusive sets, GIJCC staff member “The Commander” posted the following:

“Dec. update:
I just wanted to confirm that we are in the final stage of approving sample figures.
The first one will be previewed in the January issue of the GIJCC Magazine!”

So it looks like the figure reveals could start cranking pretty quick.  For folks who don’t remember, the full details on the 2011 Convention Set can be found right here.