A short while ago, HissTank member and fellow Renegades enthusiast kennywr22 reported on a TV listing from MSN.com that seemed to verify that Renegades was airing on November 26th.  Well, considering that information was officially confirmed today via Hub press release, I decided to hit up MSN again and see if they had any updated intel.
Turns out, they do!  We now have episode listings (with titles) going all the way through December 24th!

From the looks of it, there are a lot of 2-parters…and one of them looks to be a 2-part special broadcast on Christmas Eve.  Check out the screencapped schedule image below! 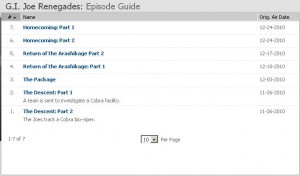