Toys “R” Us has released a new sales flyer for this weekend, featuring some “Doorbuster” deals, and among one of those mentioned deals, G.I. Joe: The Rise of Cobra figures are Buy 1 get 2 Free!  Depending on the stock at your local Toys “R” Us, this could be a great time to boost your Rise of Cobra armies, or just clear out some peg space for the eventual arrival of more Pursuit of Cobra stuff.
’tis the time for Toys for Toys as well!  I’ve mirrored an image of the ad below, it can be found on ToysRUs.com.  Big thanks to Compulsive Collector for the information! 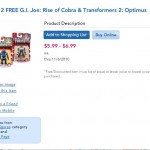