The Terror Drome has dug up an image of some Anniversary themed troop builder packs, one of them that we’ve seen before, but one of them we definitely haven’t.  The real question is, are these upcoming items, or merely packaged images of packs that have since been cancelled? 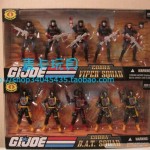 I’ve seen some hypothesis in various places that packaged pictures automatically means we’ll be seeing these items in the future.  I’m not so sure.  We know the Viper Troop Builder pack was marketed prior to the end of the 25th Anniversary line, but  Hasbro has stated in past Q & A’s that the Viper troop builder pack was canceled.  It’s quite possible that packaged samples were put together before that cancellation (heck, we’ve seen packaged versions of Wave 14 figures, and those are definitely canned).  I personally wouldn’t bet the house that these items are coming out this year or at all.

Personally, it doesn’t really bother me either way.  I’ve got enough BATs to last a life time, and the non-dirtied Resolute version is nothing special.  None of those Vipers are the “fixed” versions, so I couldn’t care less about any of them, even with a poorly cobbled together Mercer figure.  So yeah, I wouldn’t expect to see these at retail any time soon, and personally, that doesn’t bug me in the least.  I’d rather Hasbro invest their time and money into cool Rise of COBRA product, or Resolute stuff, and leave this substandard troop builder stuff in the past.