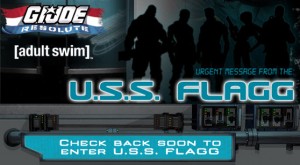 YES!  Finally the confirmation we’ve all been waiting for!  Hasbro has officially announced the debut of G.I. Joe: Resolute to adultswim.com Friday, April 17th on AdultSwim.com, to air on Cartoon Network and Adult Swim afterwards!  The full, official press release is below:

PAWTUCKET, RI – April 15, 2009 – Hasbro announced today that G.I. Joe: Resolute, an adult fan oriented animated mini-series, will be broadcast via Cartoon Network’s Adult Swim on television as well as online.  Based on the classic G.I. JOE brand, Hasbro created 60 minutes of total content for this new story which will be presented as 11 episodes.

Beginning on April 17, fans will be able to see the first five minutes of the brand new, stand-alone animated mini-series on AdultSwim.com.  These episodes are broken down to ten 5-minute episodes and one 10-minute finale.  Following the first episode on April 17, subsequent installments will be posted on the Adult Swim website leading up to a full presentation of the entire series.   This finale will be broadcast on Adult Swim April 25 at midnight.  This televised event will not only feature all episodes seen online, but will be the first time fans can watch the final 10 minutes of the G.I. Joe: Resolute saga.  All episodes, including the finale, will be available to view online after this airing.

Intended for the adult fan that grew up with the brand in the 80’s, G.I. Joe: Resolute received standing ovations at both the G.I. JOE Convention, “JoeCon,” and San Diego Comic-Con in 2008 where sample clips were previewed.  Since then, fans have eagerly been awaiting the announcement of air-dates for the series.

“In a very exciting year for the G.I. JOE brand, we’re thrilled to be able to bring the G.I. Joe: Resolute animated series to the adult G.I. JOE fan,” said Michael Verrecchia, Director of G.I. JOE Entertainment Marketing.  “Adult Swim is the perfect broadcast platform to deliver the series, which features a more sophisticated animation style and story than prior animation.”

Hasbro developed the animation with executive producer Sam Register as well as a powerhouse creative team at Titmouse Studios including Joaquim Dos Santos, a veteran animation director, who worked closely with award-winning comic writer Warren Ellis, who penned the entire series. This highly regarded team brings an edgy, intense feel to the series, which will feature the most popular characters in the G.I. JOE vs. COBRA canon.  Iconic characters such Duke, Snake Eyes, Scarlett and Roadblock will do battle with Cobra Commander, Destro, Baroness and Storm Shadow.

Hasbro, Inc. (NYSE:HAS) is a worldwide leader in children’s and family leisure time products and services with a rich portfolio of brands and entertainment properties that provides some of the highest quality and most recognizable play and recreational experiences in the world. As a brand-driven, consumer-focused global company, Hasbro brings to market a range of toys, games and licensed products, from traditional to high-tech and digital, under such powerful brand names as TRANSFORMERS, PLAYSKOOL, TONKA, MILTON BRADLEY, PARKER BROTHERS, CRANIUM and WIZARDS OF THE COAST. Come see how we inspire play through our brands at http://www.hasbro.com. (C) 2009 Hasbro, Inc. All Rights Reserved.