I know, I know…my reviews have taken quite a bit of a hit lately and gotten thrust onto the back burner.  For folks who aren’t aware, my review “shooting area” is in my garage.  My unheated garage.  I live in New England, and for the past 3 months it’s been pretty damned cold, and frankly, sitting in the unheated garage and taking pictures for a c0uple of hours ain’t really high on my list of fun things to do.  But that’s a lame excuse…and now I’m going to at least try and get back on the review train with the Wave 1 Comic Packs.

I was pretty thrilled when I heard the Comic Packs in 2009 would be flying the “Resolute” banner.  Ever since I saw that 5 minute clip at the G.I. Joe Convention, I have been on a Resolute “high”, waiting with baited breath to see when we would see the whole thing.  It would seem to be the animated feature that all of us as twenty and thirty-something fans have been waiting for.  Violent?  Sure.  Action Packed?  Definitely.

It’s still somewhat out in the open as to whether or not the series will actually have some character.  We can get generic special ops military action pretty much anywhere, but what’s given G.I. Joe life over the past twenty-seven years are the characters, and it’s a tough call as to whether or not Resolute will have any of that intact.

I was really hoping to get a glimpse into that universe with the Resolute comic packs, but alas, that wasn’t to be.  Even though the Resolute banner flies on the package, there is absolutely no evidence in the pages within that this comic comes from a different universe.  We have familiar characters, familiar vehicles, and familiar story elements that seem to show that this comic pack just takes place in the standard G.I. Joe universe, and really does not seem to have any connection to Resolute.  No Resolute character designs, no Resolute vehicles, nothing to really separate this from a standard G.I. Joe world.  Somewhat disappointing, but the story at least was good.  It’s interesting to see the dynamic between Tunnel Rat and Storm Shadow, and their conflict is pretty tense, even without any ninja action or battles going on throughout.  For a standalone toy tie-in, the book is actually pretty entertaining.

As for the figures themselves, I think Hasbro did a pretty decent job.  Evidently the “Resolute” Tunnel Rat looks remarkably like the Real American Hero version, because that is who this figure and character is.  From the familiar bandana head sculpt to the short stature and arm camouflage, this is a very good representation of how Tunnel Rat appeared in the classic days.

However, I gotta admit, I’m not sure what’s up with that head sculpt and the eyes.  Yes, Tunnel Rat has Chinese bloodlines according to his filecard, but the sculpting and paint apps on his eyes borders on rediculous.  The head sculpt itself isn’t terrible, but if they at least painted some whites on his eyes, it might take away at least a little bit of the exaggerated nature of the figure.

Besides that minor quibble, though, the figure is pretty decent.  He borrows parts from several other figures with slightly modified legs to make him shorter in stature compared to some of this fellow troops, which is in accordance with his old school “short but stocky” personality.

From the perspective of paint applications, Tunnel Rat again remains pretty true to his vintage version.  His green shirt, his black pants, the arm camouflage and even the emblem on his left shoulder, everything is pulled pretty straight from the vintage version and this is a pretty nice update.  He comes with a nice rendition of his heavy machine gun, and also has his explosive charges, but does not come with his huge, oversized backpack, which is a shame, since that was a pretty big part of the original figure.  I do like the removable shoulder holster and “bullet belt” as well.

All told, I’m glad to see Tunnel Rat get included in one of these Comic Packs, and even though it’s a “Resolute” pack, he’s got the vintage look, and it works well.  Nothing amazing or incredible, but an accurate enough rendition to work well for me. 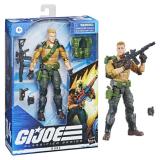 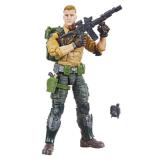 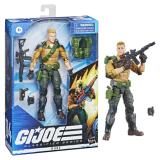 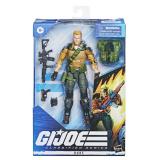 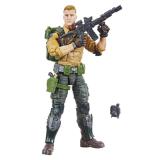 Along with Tunnel Rat comes Storm Shadow, one of the most over-exposed characters in the Anniversary line.  It’s funny, one of the characters that was strangely ignored throughout most of the new sculpt line was Storm Shadow.  We got one early in the Joe Vs. COBRA days, then didn’t really see another credible Storm Shadow figure until Valor Vs. Venom hit almost 2 years later.  Now, Storm Shadow is sprinkled heavily throughout the anniversary rotation, and that continues here.

However, Hasbro goes in a slightly different direction with this version.  Dubbed as a “Training” version of Storm Shadow, this time the COBRA Ninja is decked out in ceremonial pads on his chest and shoulders, with some ornate headgear, and a very familiar removable face mask.  His uniform is sculpted much more baggy than in previous versions, and in spite of myself I find that I really actually like this figure.

Does it work in a more modern G.I. Joe setting?  No, not in the least.  But from an execution standpoint, the figure actually looks really nice, ceremonial gear and all.

This is a Storm Shadow that looks fairly different from any other, and I think it looks pretty nice.  You’re not going to have him going to battle side-by-side with fully equipped COBRA Troopers, and honestly I’m not sure how this look fits in with the Resolute theme, but it’s still a nicely detailed, great looking figure.

Not only that, but Hasbro ties in some elements of Ninja Force COBRA agent “Dice”.  The removable face mask looks a lot like the same mask Dice wore back in the 90’s, and the staff and axe were both held by the purple-clad ninja as well.

Is this a perfect figure?  No.  And it doesn’t fit very well with a more modern terrorist organization.  But all of that aside, I do think the figure looks neat.  I’ve seen lots of folks calling this a “Samurai” figure and complaining that this should have been Budo, but I just don’t see it.  Beyond the fact that he’s wearing some pads on his chest, arms, and legs, I don’t really see a ceremonial “samurai” look, and it works fine for me, even if it will be tough to work the figure into a more modern universe. 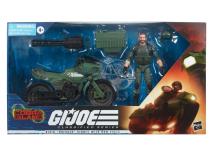 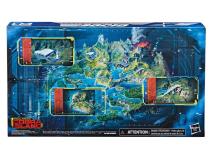 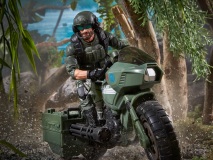 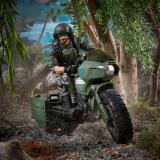 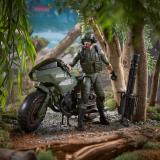 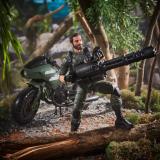 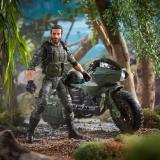 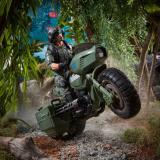 All in all, a pair of okay figures of okay characters.  Neither one blows my socks off, but they’re each solid figures with their own positives and negatives.  I’m glad to see, even as the Anniversary line wraps up, we’re getting somewhat obscure characters worked into these Comic Packs, and Tunnel Rat is a decent representation of the character. Storm Shadow is a whole lot less obscure, but at least has a pretty interesting look.  Not a bad pack altogether.