With the early years of G.I. Joe getting some serious credit with the Anniversary figures, it was only a matter of time before Hasbro started dipping into the late 80’s to find some good subject matter, and personally, I can’t think of a better subject than Shockwave.  One of my long time favorites, Shockwave is a great character and a great figure, and definitely deserves to get some recognition.  It was pretty obvious once the Comic Pack Firefly hit retail that Shockwave was at least on the radar, and by the looks of things, he just barely squeaked in, as it would seem the Anniversary line has petered out for the year.

Like the Tunnel Rat/Storm Shadow set, this pack appears to pull from the “Resolute” universe, but the end result couldn’t appear to be more apart from that futuristic, edgy universe.  Like the other pack in this assortment, this would appear much more grounded in the Real American Hero universe with a mixture of classic homage and a new take on a familiar character.

Like the other pack, the vintage homage uses mostly existing parts and experiments a bit with some parts choices and accessories.  I’m not wild about some of the choices for these vintage figures, but the overall appearence is still fairly successful.

The comic issue is somewhat entertaining, though nothing spectacular.  The bizarre introduction of “Nitro Dude” is a very strange inclusion and somewhat of a head-scratcher.  There are some nice throwbacks throughout the issue, specifically the fact that “Pilot Destro” is actually piloting the instantly recognizable Despoiler from 1988.  Shockblast seems a bit out of place in the midst of a jungle operation, but all in all, the issue is at least entertaining, even though it’s not an especially compelling read.  As for the figures themselves…

Okay, we all knew Shock”wave” was in the hopper once the Comic Pack Firefly came released complete with his tactical vest, especially because the knit mask was already in such heavy use throughout various figures.  I mean those were really the most identifiable components of the Joe SWAT specialist, so the other parts could just be cobbled together after the fact.

However, it almost seems evident that Hasbro did indeed “cobble” the figure together without much consideration of how the parts really work.  The COBRA Trooper arms are especially somewhat disappointing, mostly because of the restricted elbow articulation.  I’m not sure what a better choice might be, but all I know is that I’m not wild about these arms at all, and it has a negative impact on the figure overall.

However, I do have to say that I love the legs…using the Snow Job legs was a good idea, it gives him a stockiness and the flexibility that the figure needs.  However the holsters end up quite mis-sized, one is larger than the other.  Both holsters fit the pistols fine, but I just have no idea why the holsters themselves both need to look so different.  Just doesn’t make much sense to me.

From an accessory standpoint, Shockblast is woefully under-armed.  They gave him a neat gas-mask and SWAT helmet, but at the expense of a decent submachine gun and backpack, both of which were critical elements of the figure back in the day.  I would have much rather had the machine gun than the helmet or gasmask, and it’s a shame that we have three different pieces of headgear, none of which will work together.  I’d rather have accessories that can all be utilized at one time than three separate pieces, only one of which can be worn at once.  I do love the twin pistols, but it just seems odd to me that a guy who’s specialty is heavy combat would only come armed with two pistols and no machine gun.

The paint applications are fairly accurate and bring up thoughts of the original Shockwave just fine.  The camouflage pattern isn’t exactly the same, but its close enough to work.

All in all, from an homage perspective, I’m glad to see Shockwave (Shockblast?) included, but he just seems sort of “thrown together” without too much thought or consideration to how his accessories should be allocated.  The thought is good, the idea is good, but the execution seems somewhat lacking. 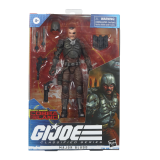 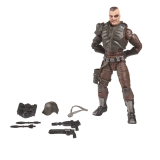 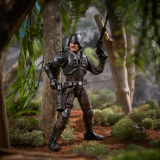 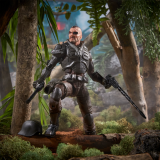 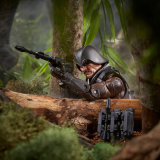 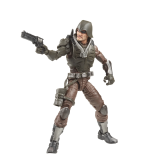 So the vintage homage figure in this two-pack is a bit of a mixed bag.  How is the Resolute-themed one?

Like Storm Shadow, he’s got a very different and unique “theme”, and like Storm Shadow, the end result is quite mixed.  When we first saw concept art for Resolute, I was pretty much in love with the Destro…an oversized cybernetic monstrosity, the Resolute version of the COBRA weapons dealer seemed like an awesome blend of Sigma 6 and Ghost in the Shell, and man, I loved the look (and still do).  I had no thoughts that Pilot Destro would be such a massive and bizarre departure from pretty much everything done before.  Bizarre is pretty much the only word I can think of to adequately describe this figure.

The head sculpt is fine, but the body underneath all the assorted armor (belonging to the Iron Grenadier version of Destro).  His arms and feet only add to the strangeness, with some oversized hands and what appear to be cramp-ons on his feet.  Why would a pilot need spiked boots?  I have absolutely no idea.  I can only imagine they gave him those feet as a sort of inclination of his cybernetic tendancies, but it doesn’t come across that way at all, it only looks out of place.

I do find myself actually liking the way the head comes together, though.  The neck scarf and wrap-around comm unit are both cool elements that I actually like a lot.  The chest gear is cool, and I even really like the red and purple colors of the uniform.  I can’t really explain why, but I just think it’s a neat “look” even though it’s a huge departure from Destro’s look in the past.  Along with these uniform alterations, Destro also comes with a tech backpack and cabling that connects to his left arm, which is another thing that I actually think is pretty cool and different.

Really, though, I can’t explain why Hasbro did what they did here.  Pilot Destro neither looks like a pilot or like Destro.  He doesn’t look like an comic incarnation, or like the Resolute incarnation, instead coming across as something completely different.  In some ways it works, but in many ways it does not. 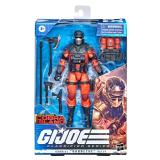 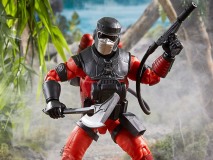 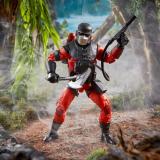 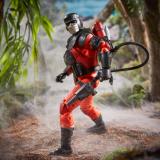 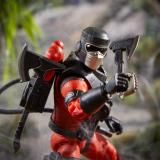 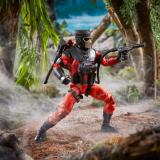 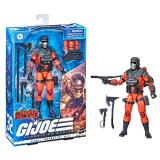 This assortment, and this pack in particular are the epitome of head-scratchers.  Mixed bag vintage homages, strange decisions for existing characters, and somewhat out of place comic book issues all come together to really make me wonder exactly what direction Hasbro was going in here.  There are some glaring holes in existing rosters and some of the “real” Resolute figure designs are not  getting the showcase they deserve, yet we get some cobbled together, downright bizarre looking renditions of characters that have already been overused.  Conceptually some very strange choices, and in execution some swings and misses as well.  I wish I could come down with a concrete rating, but it’s just too tough to do here.  Definitely not “wow’ing” me, and it seems like a pretty weak way to end the run of Comic Packs that have been more or less impressive.