The Making of a Dio-Story pt 1 – The Script

So I gave folks the chance to choose what they wanted me to talk about first when it comes to the long, complex process of making a dio-story.  Overwhelmingly, people wanted to see the scripting/storyboarding process, which of course, is one of the more complex parts of producing these works of fiction.  I will do my best to outline the long road I take between concept and production for these stories, and hopefully some folks find it entertaining, useful, or maybe even both.

I’ve run across a number of personalities since I’ve been a part of the online G.I. Joe community, and many of them fit into a particular category.  There are cartoon fans, there are comic fans, there are vintage fans and new sculpt fans.  Now we start to divide even more into movie fans and non-movie fans, Resolute fans, Anniversary fans, Sigma fans…well, it gets almost ridiculous.  Me?  I’m a toy fan.  Plain and simple, I love the G.I. Joe toys, and while that might not make sense for me to bring up in this article, trust me it does, because the toys ultimately drive my dio-stories.  I’m going to try to break this down as much as possible, and I hope you can all follow my strange stream-of-consciousness rambling, feel free to ask questions in the “comments” section and I’ll try to answer them, or even follow up in a future posting.

STEP ONE – The Toys

Yes, the toys.  Remember how I said I was ultimately a toy fan?  Well, believe it or not, every installment of every dio-story I produce starts off with a basic question: what toys do I want to feature?  That is my initial question and initial purchase in nearly every case.  Hit & Run appears in so many stories because I love that figure, and the same could be said of Interrogator.

You’ll notice throughout my Collectors’ Club dio-stories that I always feature the Convention and Collectors’ Club exclusives, which is why I love producing those stories, because I’m always big fans of those toys.  So the very first step I take is to decide what toys I want to showcase and what figures I really love and feel like need exploring, and I build the story around that.  I’m going to use Ghosts as my primary example throughout this article, and as I’m sure you can all tell, I wanted to feature the Eco Warriors and Air Commandos.  I’ve always been a 90’s figure fan, and neither of these groups get the credit they deserved, so I made a conscious effort to write both groups into the script.  The Eco Warriors were easy, because the Renegades were launching attacks on various COBRA installations.  Why not make one of them an Ecological Terrorism group led by Cesspool?  That wasn’t much of a stretch.

The Air Commandos was a bit trickier, just because they don’t really have a base of operations per se…but I figured they would be a good group that could assist in getting COBRA operatives over the border, using undetectable air gliders as transportation.

So, the first step is an easy one.  What figures do I want to use?  Then I can slowly build the story around those figures and characters.

My next step is where the story starts.  An outline.  And this outline is exactly what it sounds like, just the bare bones of a story.  Sometimes during the outline I’ll decide how many chapters I’m going to do for any given story, and I’ll do a very basic write up of what’s going to happen in each chapter.  This can sometimes start out as a VERY brief outline of what I want to accomplish.  Something like this: 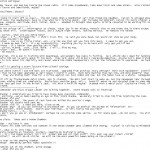 As you can see in that snippet, these are very quick, very brief outlines, that often times get totally changed during production.  There are actual scenes in that above outline that never even made it to the final script (notably the Venomous Maximus scene and the Overkill/B.A.T.s sequence).  Scenes get dropped for various reasons…in the above case, I felt like working Venomous Maximus into the scene was forcing things WAY too much.  It seemed really out of place, and while I love the Maximus figure, I really don’t want to work him into a story where he’s going to seem out of place.

As for the B.A.Ts and Overkill, that was something else.  He’s a bit part of an ongoing story, and I felt like trying to shoehorn his story into all the other stuff going on here was pushing things too far.  Ultimately I ended up dropping both scenes to concentrate more on the Renegades and the main storyline.  That outline above was probably my very first written word concerning “Ghosts”.

After the outline, I refine the scripts and start the episode-by-episode breakdown.  I take the outline and fluff up the events, write the dialog, and do a brief scene description of where guys should be standing, who is in each scene and what happens in each frame.  It ends up looking remarkably like a comic book or play script, I’d imagine, though the funny thing is, it’s very often that what I write (even in my final script) isn’t always what comes out on the screen.

Below is an example of a more finalized script: 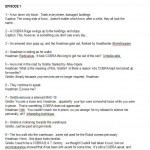 As you can see here, I start breaking things down by individual frame, so I have a better idea of exactly what scenes I want to shoot, where the shooting is taking place and which figures will be in each chapter.  This is critical later on in the process, because how I shoot these scenes is a little bit unusual.

As I said in Part 3, the way I shoot scenes is pretty unconventional.  First of all, I obviously use the script I wrote as a guideline, which helps me with foreshadowing, with how the plot progresses and how the story begins and ends.  I script the entire story before I start shooting anything, but once I start shooting, I do it a bit differently.

I basically organize the entire story into “Scenery”.  I take chunks of the story and then figure out where I’m shooting particular scenes (whether it’s a section of my backyard, an indoor set, or using various cut and paste techniques) and I shoot many scenes at different points in the story all at once.  If I have various scenes in the Mobile Command Center that take place throughout the story, I’ll actually setup the MCC and take all of those pics at once, then save them and scatter them in throughout the chapters as needed.  Same thing with outside shots.  This can be hit or miss, because sometimes weather plays a factor, and sometimes the scenes end up looking more similar than I might want, but that’s just something that I kind of have to roll with.  So, as I shoot my script, I actually rewrite it and re-organize it into “location shooting” where all of the scenes are clumped together like so: 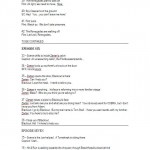 As you can see, I pick and choose the “outdoor” shots from Episode Six and combine them with Episode Seven just so I can shoot them both simultaneously if I so choose.  This is where a cohesive script is important, because I’m taking the scenes totally out of context just for shooting sake.

PART FIVE – The shooting (and refining)

Now as much as I throw around terms like “final script” and such, the truth is, no script is final.  The scripts are ALWAYS a backbone that I use to take the pictures, and will almost always get changed as I’m actually taking the photos.  The reason for that is the flow of action…as silly as it may sound, while I’m shooting these scenes, I’m often re-enacting the scenes with the figures, and often times writing what I want to happen in a particular scene, does not work as the flow is actually moving.  Any given action scene, unless I’m totally married to doing it the way it is written, will change dramatically from written word to actual production.  As the scene unfolds in front of me, whether it’s in the MCC, or in the dirt in my backyard will impact how the action progresses and what ends up on the final screen.  As an example, here is my full “final” script for Episode 5 of Ghosts, which is where the Renegades intercept the Air Commandos: 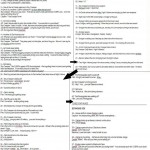 You’ll have to excuse the screwy format that I got that uploaded in, but I couldn’t really think of a better way to show it.  But anyway, here is the final installment of Episode 5. You can kind of compare and contrast and figure out where the similarities are, and where there are changes.  The changes in that particular chapter were actually relatively minor, but it might be interesting to see, anyway.

So as you can see, the scripting process is long and pretty involved.  It often takes longer than actually taking the pictures.  But thankfully I can at least work on the script while sitting on my ass, so that helps a bit.  😉

Feel free to shoot any questions my way, I hope this was helpful and insightful.  More will be coming, for sure!