The DVD “Battle Packs” – How do they measure up?

As I’ve already said countless times throughout this “Sunbow Weekend” I’ve always primarily been a comic book fan, and luckily for me, Hasbro has kind of catered to that.  Since 2004 we’ve been getting comic packs with comic exclusive deco’s and a few comic-specific characters (though not everyone we’re asking for like Billy, Kwinn or Dr. Venom….).  However, the cartoon faithful have kind of been left in a lurch, with no real way for them to get the characters and figure deco’s that they’ve been wanting…

And man, has it been worth the wait.  It’s amazing to me how much subtle changes can really put a whole new spin on characters we’ve already gotten a number of times over and really give us definitive versions of figures that we haven’t gotten in over twenty-five years.

First I’ll talk about “Battle Pack” #1, featuring the MASS Device.  Images used in this review are courtesy of the fine folks at YoJoe.com (used with permission).

The Scuba Suit Baroness at first was kind of a strange choice to me.  Sure, it looked easy enough to cobble together, using mostly the Anniversary Scarlett with a new head, new forearms, and new feet, but I wasn’t sure exactly where this figure was supposed to “fit”.  What about Gung Ho?  He was a pretty central character in the MASS Device.  This just seemed like a bit of a waste, especially using the new tooling.

But then I saw pictures of the upcoming “Bonus” Wave 8 figures that we’re getting, and my mind was totally changed.  Included within that wave is a Torpedo figure painted up to resemble the red-clad COBRA divers that accompanied the Baroness on her mission to retrieve the heavy water.  Suddenly this figure wasn’t so useless any more!  With some great COBRA scuba divers and a few awesome looking COBRA Eels from Wave 7, the Baroness will make for a great team leader for underwater attack missions.  Suddenly I LOVE the inclusion of this figure, and I can’t help but me impressed at how nicely they got her together using mostly existing parts.  Very nice.  Without the other divers, I’d give this figure maybe a 6/10.  But as the leader of a matching COBRA dive team, she moves up to about a 7.5/10.  It makes that much of a difference.

Next in line is the COBRA Trooper, very heavily influenced by the cartoon look.  The white straps, the bare hands, and the great accessories that he comes with are all added bonuses.

This COBRA Trooper uses all of the same tooling as the standard COBRA Trooper, but there are a few critical differences that separate it from the others, all having to do with the paint deco.

First of all there is a distinctly lighter color tone with a white leg pouch and white trim webgear, all resembling the cartoon look.  Along with the lighter colors there there is also a much larger, more prominent COBRA logo on his chest as well, which is something a lot of the fans have been clamoring for.  I love that aspect of this trooper, the large COBRA logo is a great addition.

As far as accessories go, I like that he comes with a cartoon-era COBRA laser rifle, as well as the handcart and MASS elements he came with.  A very nice touch, and I like how it also ties in with some of the single packs as well, which come with the rounded containers of the elements, too.

Some minor, subtle changes here and there really make for a nice, different figure that compliments the set very well.  Not a whole lot of new stuff here, and I do kind of wish this kind of trooper was available in a single pack, but this figure gets a solid 6/10 from me.

As for the Joe side of things we get a couple of long-time standouts and core members of the Joe team, each one with some new little additions.

Sgt. Stalker wasn’t featured heavily as the cartoon went on, but he did make quite an impact in the MASS Device mini-series, and he was often seen in the cartoon (and the comic) soaring around with his JUMP jetpack and firing upon COBRA troops with the familiar laser rifle.

This version of the G.I. Joe Army Ranger is the same as the original Wave 3 version, only in lighter more “cartoon” colors.  Light brown straps, light green camouflage and much lighter more metallic plastic on the gun and the jetpack gives Stalker a very “animated” feel and makes him fit right in with the rest of the cartoon era characters.

Stalker is a longtime core character of the Joe team who doesn’t always get the credit he deserves with the part he played in early cartoon episodes.  I’m glad to see him added here, and they did a pretty nice job making him cartoon accurate.  7/10.

Last but not least is another version of Snake Eyes, who has become quite the staple of the Anniversary line.  As I mentioned in my “Top 5 Mass Device Moments” post, the scene where Snake Eyes gets irradiated is one of the pivotal moments of the MASS Device, and it’s neat the way they worked that into an actual action figure.

But I am pretty conflicted with how I feel about the inclusion of this figure and character.  We’ve gotten so many versions of Snake Eyes along the way, do we really need one specifically geared for this one single event in the mini-series?

I do have to compliment Hasbro on the way the figure came out…I do like the translucent red plastic being used on his legs and throughout his arms and the red dust on his mask brings some nice color to the figure.  The base color of the figure itself is a very nice gray “slate” color, too, which adds some color to what could have been a somewhat bland figure as well.

All told, the figure itself looks pretty neat, I’m just not sure how useful it is for anything other than this one specific scene, and this is something that I can’t see myself using on a regular basis.  Execution isn’t too bad, but the concept itself isn’t something I’m wild about.  4/10. 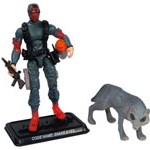 So reading my individual reviews, you might think I wasn’t crazy about this set.  Really, the figures here are a tiny bit lacking, I think.  There isn’t much new and exciting (beyond the scuba Baroness) to offer here, but with the DVD, the MASS Device component, and the wide array of accessories, this set is still worth a purchase.  I will say unequivocally, though, that the Revenge of COBRA set is heads and shoulders above this one.