Sigma 6 – What could have been

I’ve often thought that the biggest measure of how much a fan of a toyline you are is what your reaction is to what we never saw.  Make sense?

As most folks know by now, I was a huge fan of Sigma 6 and the 8″ scale.  Not just a Joe collector who didn’t mind that Hasbro was “raping my childhood” by daring to release a series of figures that were larger and more stylized than the ones I treasured for years.  I was a fan.  Tried and true, bonafide, 100% crazed fan of these awesome figures.  It wasn’t just the stylized sculpting, it wasn’t just the pseudo-futuristic weaponry, and it wasn’t just the incredible characters (both based on existing ones or new ones), it was all of it.  In my mind, it all came together perfectly to give us one of the greatest toylines seen in the past 10 years.  In fact, I wouldn’t hesitate to say that.  From inginuity to playability to presentation and collectibility, Sigma 6 was a landmark, in my opinion, and one that won’t be reached.

The Joe fandom at large will dismiss it by saying it was for kids, and they’ll push it aside because it wasn’t their devoted scale, but doing so will be doing themselves a disservice, because whether or not this “replaces” your precious 3 3/4″ Joes, it was an amazing toyline that revolutionized how packaging is designed and how toys are marketed, presented, and sold on store shelves.  Plus they were damn fun to play with!

But that’s not how I started this little essay…  this whole post started when I was lucky enough to score a San Diego ComicCon “Hasbro Sketchbook”.  This item kind of swung under the radar while folks were trampling each other for COBRA Commanders, but in all honesty, I treasure this item more than I do the black and blue COBRA Commanders I was lucky enough to get (thanks, Carlos, you’re the man!).  Why?  It’s a look inside the “mind” of the designer.  From cover-to-cover there are hundreds of different sketches of different toylines and properties from Transformers to Star Wars, and from Battle Beasts to…yes…  G.I. Joe.  There is nothing amazing, nothing mind-blowing, but just some peeks into the design process, which is a great, great thing in my mind.

Especially the Sigma stuff, which brings me to my point.  I can tell that I was a huge Sigma 6 fan because seeing the sketch in here of some sort of Sigma 6 Police Officer/Dog Handler immediately gave me pangs of disappointment.  This sketch, in it’s totallity, isn’t much different than so many of the Sigma figures we got before and since…but seeing it and realizing that it’ll never be released (and that the 8″ scale and style is now long dead and buried) is something that really bothered me: 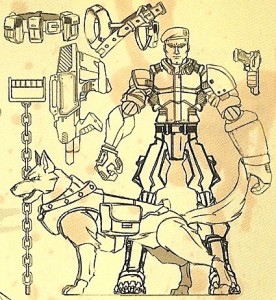 Now, don’t get me wrong.  I spend as many hours on YoJoe’s Excellent “Unproduced” section as anyone else does.  But for whatever reason, this Sigma stuff affects me more than the countless action-feature laden space aliens that we never got back in 1995.  Of course I would have loved to have seen the Battle Rangers, but part of me misses this Sigma stuff even more.  From this excellent looking Dog Hander to the infamous Adventure Team Joe Colton, Wet-Suit, and Dusty…and of course Short Fuze, Iron Fist, and the absolutely awesome Zanzibar.

Everyone and their brother is frantically running around local Wal-Mart and Target these days to try and find toys that look like ones released twenty-five years ago…  from my own twisted perspective I’d take the new and different Sigma 6 any day.

One more neat pic from the Sketchbook, showing a little “evolution” of the COBRA Commander armor: 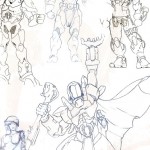 Please don’t ask me to post more pictures from the Sketch Book.  This is an awesome thing that Hasbro put together, and if you’re interested in it, BUY IT.  It’s cheap and it’s awesome, you owe yourself the chance to pick it up and check it out.