So weekends are generally pretty slow news-wise, but HissTank bucks that trend this week with some leaked images (likely from one of their mysterious contacts overseas):

I’m like any other Joe fan out there. I feed off the early leaked info, I love getting sneak peeks at upcoming product, and enjoy the speculation. But what I don’t like is when hypothesis are made about images based on no factual information that end up misleading the Joe collecting populace. This front page story proudly proclaims these images as being part of “Wave 13” and “Omega Force” (which as we all learned from the latest Hasbro Q & A is a nickname for G.I. Joe: Resolute).

Ummm… yeah. I don’t think so. This is all based on my own speculation, but as always toy collectors are quick to jump on this and start slamming the Resolute toys without knowing what we’re getting. Folks, this ain’t it. Let’s look at some facts…

Fact 1 – The initial release of “Omega Force” product was announced as coming in single packs in the first wave of 2009. Single packs generally have lots of new tooling (at least new gear), especially when they’re the first wave of the year. Look back at Wave 1, 2008… pretty much new tooling, soup to nuts.  There is ZERO new tooling here.  No new parts, no new weapons, nothing.  It’s ALL re-used, which screams “Battle Pack” or exclusive to me.

Fact 2 – The poster labels the COBRA Trooper in the thread as “Omega Force COBRA Trooper” and “COBRA Trooper with Red Logo” when in fact it’s neither of these.  It’s just the “Flint as COBRA Trooper” figure from the upcoming Wave 7 with the Trooper head on it.  Nothing new at all.

Fact 3 – We’ve seen leaked Wal-Mart lists confirming a Rock n Roll/Deep Six Comic Pack, and a Gung Ho/COBRA Commander comic pack.  That covers those 4 figures, which essentially leaves the other 4 (Storm Shadow, Snake Eyes, COBRA Commander, and Duke) as left over.  Those figures are ALL based off of older Joe Vs. COBRA color schemes (check out my review archives for details on those).  Plus these 4 figures are the cornerstones of the Joe mythos, and would all work perfectly in a Battle Pack.  Putting these figures in a single pack wave, especially the first one of the year, showcasing new toys based on a landmark animated feature, would be assinine.  Folks doubt Hasbro’s marketing strategy, but they ain’t dumb.  No way that’s what they’re doing here.  No way.

Fact 4 – As I said in the paragraph above, a lot of these figures seem heavily influenced by “G.I. Joe Vs. COBRA” paint deco’s.  This may just be coincidence, but knowing how in tune the Joe designers are with G.I. Joe’s past, I wouldn’t be surprised if this was done on purpose.  Check the image comparisons below: 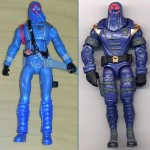 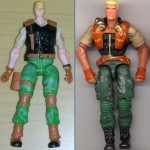 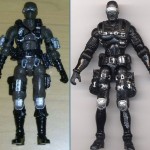 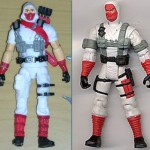 So, like I said, maybe just a coincidence, but maybe something more…  I don’t know for sure, but I strongly suspect that when we see what the “Omega Force/Resolute” figures really look like, we’ll realize that there was nothing to freak out about in the first place.

Okay…I just spent an hour on that post.  On a Saturday afternoon.  That settles it, I’m a geek.  :/

Images used by permission from YoJoe.